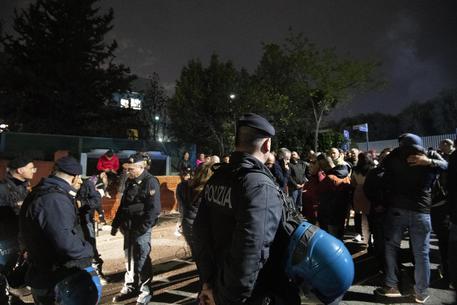 (ANSA) - Rome, April 3 - Rome prosecutors are opening an investigation into the violent protests that took place in the Torre Maura district of the capital on Tuesday against the transfer of a group of around 60 Roma people to a reception centre there, sources said on Wednesday. The probe into the crimes of criminal damage and threats with racial hatred an aggravating factor. Around 200 local people, supported by militants of the far-right CasaPound party, took to the streets in the protest, which saw trash canisters turned over and set alight. The city council said earlier on Wednesday that 60-odd people would be moved to other facilities in the Rome area.
Rome Mayor Virginia Raggi defended the decision after she came under fire for allegedly capitulating to thuggery. "I intervened to stop the situation degenerating," she said.
"The atmosphere was bad, one of hate.
"I intervened to protect the very many honest citizens of that quarter and the 33 children (among the Roma) who risked their lives and personal safety.
"It is an administrators duty to protect people's lives".
Deputy Premier and Interior Minister Matteo Salvini blasted Tuesday's violence but reiterated his position that he wants to close the country's Roma camps.
"I say no to any form of violence," said League leader Salvini.
"I say no to offloading every type of problem onto the outskirts (of the cities).
"The goal that I have been working on for months is to have no Roma camps by the end of my term as minister.
"Those who integrate are welcome. Those who prefer to steal will be sent elsewhere".