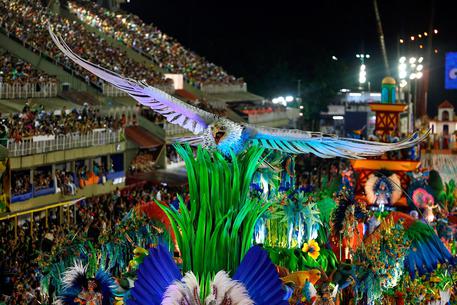 (ANSA) - Police in Rio de Janeiro and Salvador identified and arrested criminals during the recent Carnival season with the help of video cameras with facial-recognition systems.
The use of this type of technology in security programmes in Brazil is still at an early stage, but sector operators report that there is growing demand for biometric solutions.
James Miranda, a consultant specialised in facial recognition, said that it is possible to see an increase of "between 20% and 30%" a year for the market, when taking account of the expansion of the use of this technology in residential and commercial complexes and for business activities.
"A significant increase in the demand for this technology has been registered over the last four years, independently of needs," added the expert.
The systems are split into two main types: devices that have integrated facial biometric technology and software analysis that is used with other devices, such as cameras and cell phones. "The use of this technology is growing exponentially," said Fernando Terzian, the director of Terzian, a company that provides facial biometric solutions.
He cites two factors to explain the "gigantic increase" in demand: on one hand, there is the development of the quality of face evaluation, which requires greater processing power and algorithms, and, on the other, the significant reduction in prices. "All the software analysis, and facial recognition in particular, make it possible to have greater control by a smaller number of people," Terzian said.
"It won't stop growing. It's be like smartphones, something incredible. The company will present biometric face cameras with internet-access points in May in Sao Paulo at Exposec, an international fair organized by CIPA Fiera Milano and the Brazilian Association of Company Electronic Security Systems (ABESE), along with another model powered by solar energy that is capable of giving off a wi-fi signal. Terzian believes that most of the demand will come from the public sector at first before spreading to the private sector, for example, retailers and shopping centres. For his part, Miranda stressed that simply installing a facial-recognition system at a shopping centre "automatically" provides "an agent that inhibits robberies and thefts".
Rio - Monitoring by Rio de Janeiro's military police took place from March 1 to March 6. Video-camera images were transmitted to the Integrated Command and Control Centre (CICC), where a biometric system compared the faces recorded with photographs of fugitives. The software activated an alarm when there was a match. The system was tested during the Copacabana Carnival, with 28 video cameras installed in strategic positions.
"The video cameras enabled us to capture four criminals that arrest warrants were out for, to arrest an adolescent who should have been doing educational-social work and to recover a stolen vehicle," the military police said in a statement. "What was more important that the result in terms of numbers was what the team involved in the project learned and the verification of the system's applicability". Indeed, as expected, the software only froze the image and activated the alarm when the video cameras captured the features of people wanted by the judicial authorities and the number plate of a stolen car, basing itself on the data base of the civil police and the transport department (DERAN), the statement added.