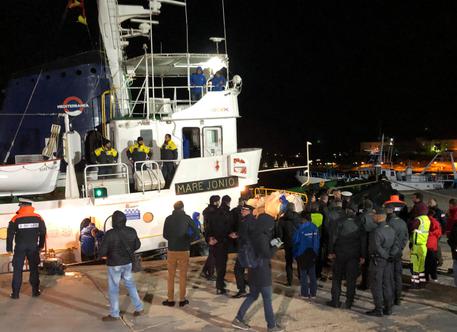 (ANSA) - Lampedusa, March 19 - The 49 migrants on board the NGO rescue ship Mare Ionio will shortly disembark at Lampedusa's port on the orders of Guardia di Finanza tax police, sources said Tuesday.
The spokesperson of NGO Mediterranea, which runs the ship, Alessandra Scìiurba, told ANSA the order had been given to the police to disembark the migrants.
The migrants shouted after the ship docked: "Liberté, liberté".
Deputy Premier and Interior Minister Matteo Salvini said the Mare Ionio had been seized and those who "do wrong will pay".
"The ship of the anarchist squats has been seized, excellent," he said.
"Now in Italy there is a government that defends borders and makes laws respected, above all by the people traffickers. Those who do wrong pay".
Salvini said earlier that the 49 asylum seekers rescued in the Mediterranean by the ship flying the Italian flag would not be allowed to enter Italy. "They can be treated, dressed and fed," League leader Salvini told SkyTg24. "We can give them any kind of comfort but they will not set foot in Italy with my permission". The ship, the Mare Ionio, entered the port of the island of Lampedusa on Tuesday evening after saving the asylum seekers, including 12 minors, in waters off the coast of Libya on Monday.
One migrant suffering from pneumonia was taken to the island's medical facility.
On Monday the Mediterranea NGO that runs the vessel asked the Italian authorities to assign a port of safety before heading towards Lampedusa.
But Salvini has said the government's policy of closing Italy's ports to NGO-run search-and-rescue ships stands.
"This was not a rescue operation," Salvini added.
"This is abetting illegal immigration".
On Monday Interior Ministry Undersecretary Nicola Molteni told Mediaset television that the rescue should have been coordinated by the Libyan authorities as it took place in Libyan waters and argued the migrants should be taken back to Libya.
Salvini said Tuesday he was "counting" on the arrest of "those responsible for" the Mare Ionio.
Salvini on Tuesday created a new working group made up of experts and officials from Italy's police forces to evaluate the situation regarding migrant arrivals after he issued a new directive on this issue on Monday.
The directive regards the procedures in dealing with rescues in the Mediterranean following what Salvini has described as an illegal intervention by the Mare Ionio.
It says that anyone who helps undocumented migrants in waters that are not Italian in an operation not coordinated by Rome and then enters Italian territorial waters damages the "order and security of the State".
The directive said Italy was not obliged to assign a 'place of safety' under international law if a vessel "deliberately and autonomously" heads toward Italy.
It also stressed Italy's coast is not the only place ships can head to after a rescue, saying ports in Libya, Tunisia and Malta are often nearer. Mediterranea, the NGO behind Monday's migrant rescue, said it was not concerned by Salvini's move.
"Minister Salvini's directive does not have much value," said Mediterranea spokesperson Alessandra Sciurba.
"As far as we are concerned, there are the rights of people, international law, human rights, international conventions.
"We have asked for a port of safety. We are Italians on an Italian ship that saved people in danger of losing their lives at sea.
"We confidently wait to enter the port".
Libyan Navy Spokesman Admiral Ayob Amr Ghasem on Tuesday confirmed that the Mare Ionio "acted improperly" in rescuing the migrants from a sinking dinghy.
He said they contacted the Libyan coast guard only after picking up the migrants, and not before as they should have.
He also said the dinghy was "intact". Premier Giuseppe Conte said that "we will resolve this too".
He said "no to indiscriminate landings like in the past and said that Italy was "providing assistance and rights as always".
Transport Minister Danilo Toninelli said he was "closely" monitoring the situation.
Deputy Premier Luigi Di Maio said that the Mare Ionio acted against Libyan orders.
"I have just spoken to Interior Minister Matteo Salvini. We are verifying the respect of legality. We have found several irregularities: the NGO which is Italian acted without listening to the orders of the Libyan Coast Guard, going against those orders," he said.
Di Maio added: "I confirm that there will not be another Diciotti case, and there will be a solution shortly", referring to a 10-day standoff with the EU last August over 177 migrants rescued by Italian Coast Guard ship Diciotti, who were eventually taken in by Albania, Ireland and the Italian Catholic Church.
Prosecutors in Agrigento on Tuesday opened a probe into favouring clandestine immigration by the Mare Ionio.
The probe is as yet against person or persons unknown.