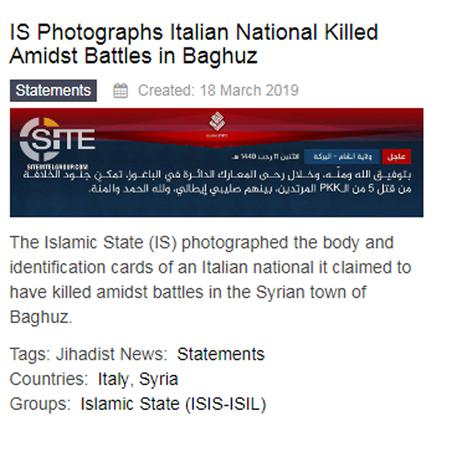 (ANSA) - Beirut, March 18 - ISIS on Monday published photos showing that it has killed an Italian in a battle at Baghuz, eastern Syria, according to the SITE website that monitors jihad-related activity on the Internet. Italian security forces confirmed the report regarding Lorenzo Orsetti, a 33-year-old Florence native who was fighting with the Kurdish YPG militia, who are linked to the Turkish PKK.
Orsetti was killed in a fire fight that ensued after an ambush by the jihadis. ISIS released a photo of the corpse, saying it was of "the Italian crusader Lorenzo Orsetti". The image was published by Aamaq, a social media new platform linked to ISIS. It shows the face and part of the chest of the victim. There are the tips of two military boots next to the face.
Orsetti died in an ISIS counterattack while fighting with Kurdish forces in Syria, his father confirmed.
"His Kurdish commander telephoned me and told me that Lorenzo died together with all his group in an ISIS counterattack this morning," Alessandro Orsetti said.
"It appears that his group was surrounded, it was with an Arab unit, but I don't know exactly what that means from a military standpoint. They killed them all".
Orsetti's letter-testament says "Ciao, if you're reading this message it means that I'm no longer in the world. Despite this premature departure, my life still remains a success and I'm almost certain that I've left with a smile on my face. I couldn't have asked for more".
"I have no regrets. I died doing what I believed best, defending the weak and remaining faithful to my ideals of justice, equality and freedom.
"I insist on the need to give one's life for your fellow man, because that is the only way to change the world." The letter is signed "Orso, Tekoser, Lorenzo", referring respectively to his surname Orsetti, his Kurdish nom de guerre and his first name.
It ends with an exhortation: "Remember that 'every storm begins with a single drop'. Try to be that drop". Orsetti was one of six Italians, including two women, who were fighting with YPG, according to a report in February by Fausto Biloslavo for the 'Occhi della Guerra' (Eye of War) website.
"I don't intend to come back at the moment," Orsetti, who had been given the nom de guerre 'Heval Tekosher', the fighter, said in an interview for the report.
"If I were to be accused of something, I would say that I'm proud of what I'm doing in Syria. I'm ready to accept any consequences. "A couple of times they almost managed to surround us. "In the desert they counter-attacked and overwhelmed our positions.
"When your companions beside you start to die, especially because of mines and snipers, you don't forget it...
"The Islamic State is absolute evil. This is a battle for civilization". Orsetti's mother said she has not had official confirmation of his death, while adding that she had not been able to contact him via telephone for over a day. "He's a good lad. He's only 33," she said.
"He has always wanted to help other people.
"We were against him going. I can no longer sleep at night.
"But he wanted to help this oppressed people".
Orsetti's father Alessandro Orsetti went on: "we are proud of him, of the choice he made, but we are destroyed by grief.
"For a year and a half, that is since he left, we have been anxious, happier when we heard from him on the phone, anxious when time went by without hearing from him.
"When he decided to go and fight for the Kurds, my son told us he wanted to do something for them, he didn't want to do nothing, he wanted to help them in their cause.
"He hadn't been in Florence for a year and a half. We used to tell him 'come away, come home, because you've done your bit and it was important'.
"We asked him when he was coming back but he answered that the situation was very delicate for the Kurds and he wanted to keep helping them in their cause".