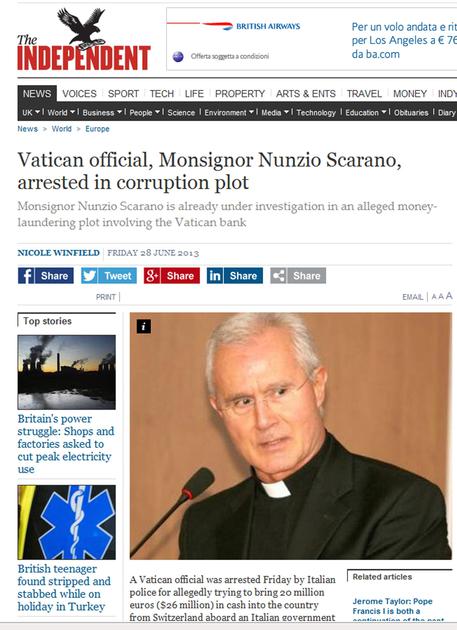 (ANSA) - Rome, February 13 - Msgr Nunzio Scarano, a former Vatican financial official who tried to fly 20 million euros back to Italy from Switzerland, was convicted of defamation and corruption on appeal Wednesday and given a three-year sentence. At the first instance trial, three years ago, Scarano was not convicted of corruption and got a two-year sentence only.
Scarano, former accountant of the Holy See's asset-management agency APSA, wound up in jail in June 2013 on charges of corruption. The cases of his two alleged accomplices, former intelligence officer Giovanni Maria Zito and broker Giovanni Carenzio, were put into separate proceedings. Zito, having leased a plane to go to Switzerland, did not reportedly succeed in the mission to bring the money back to Italy. Scarano was accused of defamation for falsely accusing Zito of stealing a 200,000-euro cheque Scarano gave him as part of the alleged corruption.