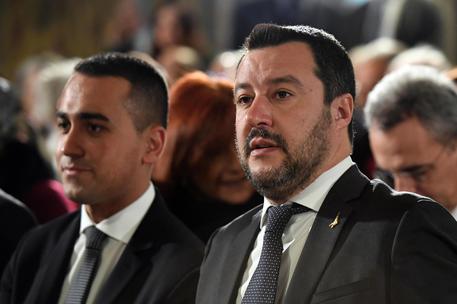 (ANSA) - Terni, February 6 - Deputy Premier and Interior Minister Matteo Salvini said Wednesday that it was odd that the government had allowed Paris to have access to a key cost-benefit analysis on the controversial TAV Turin-Lyon high-speed rail link before him. The government has said the analysis will have a major bearing on whether it decides to press ahead with the project. It sent the report to the French government on Tuesday.
League leader Salvini says the project should go ahead but his coalition partners in the 5-Star Movement (M5S) are opposed to it.
"I, the deputy premier who represents the Italian people, do not have the cost-benefit analysis on the TAV but it seems that Paris does," Salvini said during as visit to the central city of Terni.
"This is quite bizarre". M5S leader, Labour and Industry Minister and fellow Deputy Premier Luigi Di Maio disagreed.
"Salvini should relax. I haven't read the cost-benefit analysis either," Di Maio said.
Transport and Infrastructure Minister Danilo Toninelli said it was normal for the French authorities and the European Commission to see the analysis before other members of the Italian executive. "We gave the report to France first because it relates to an international treaty," said Toninelli, an M5S member.
"Today we will give the cost-benefit dossier to the European Commission. "Matteo will have to have a little patience and wait 24 hours. "When the time comes, I'll take it to him personally in a closed envelope". The transport ministry said Wednesday evening it had sent the report to the EC.