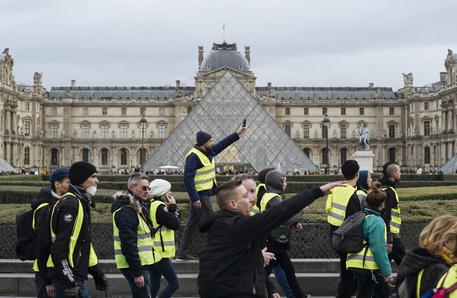 (ANSA) - Rome, January 11 - Deputy Premier and Labour and Industry Minister Luigi Di Maio on Friday hit back at a suggestion by a French official that Italy could be financing the Yellow Vest protest movement. The French Minister of State for Gender Equality Marlène Schiappa on Thursday said that she intends to look into whether "foreign powers" are involved in online fundraising to help violent protestors within the yellow vest movement, Italy first and foremost Di Maio, who has said his 5-Star Movement (M5S) was ready to support the Yellow Vests and wanted to meet representatives, said French President Emmanuel Macron was fuelling the protests with his policies. "The appointment in the coming days with some of the Yellow Vests to find out their intentions at the European level remains," Di Maio said after one of the protestors said he no longer wanted to meet the M5S chief.
"I understand what one of the figures did yesterday because if a minister from Macron's government starts talking about plots, saying other nations are financing the Yellow Vests, it is necessary for the movement to move away.
"I'd like to explain to that minister that the Macron government is financing the Yellow Vests politically with the absurdities that it is doing".