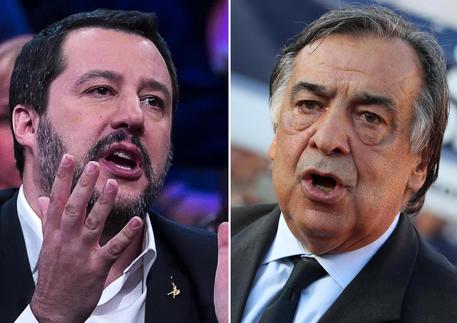 (ANSA) - Rome, January 3 - A clash between Interior Minister Matteo Salvini and centre-left and left-leaning mayors on the minister's recent security and migrant decree continued on Thursday.
As Salvini said the mayors would have to change their allegedly lenient ways regarding migrants, a fresh row erupted over a migrant ship that has been seeking landfall for over a week.
Naples Mayor Luigi de Magistris said Thursday he was ready to open his port to Sea Watch, an NGO ship that has been roaming the Mediterranean for days with 32 migrants on board.
"I hope this boat comes to the port of Naples because unlike what the government says we will put into the field a rescue action and we will let it into the port," he said.
He said "I will be the first to lead the rescue actions".
Italian ports are closed to NGO migrant rescue ships, Salvini reiterated after de Magistris's promise. "Italian ports are closed, we have already accepted too many fake refugees, we have enriched too many migrant smugglers!," he said.
"Let the leftwing mayors think of their citizens in difficulty, not about clandestine migrants".
The party is over for some leftwing mayors who allegedly benefited from migrant reception business, Salvini went on to say.
"With the (Democratic Party) it was chaos and clandestine migrants, with the League it is order and respect," said the leader of the anti-migrant League party.
"Certain mayors look back fondly on the good old times of immigration, but for them too the party is over!".
Salvini was commenting on a rebellion against his migrant-security decree by mayors including Palermo's Leoluca Orlando who say it unfairly strips some migrants of access to healthcare and other local services and allegedly ejects thousands of migrants from the system creating potential criminals.
Orlando, for his part, said his perceived rebellion against Salvini's allegedly "inhuman" migrant clampdown had been "a dutiful institutional act".
"Don't call me a rebel. My action is a dutiful institutional act, against a decree that authoritative men of the Church have described as inhuman", he said in press interviews.
Orlando has been joined by other left-leaning mayors including de Magistris in Naples, Dario Nardella in Florence, and Federico Pizzarotti in Parma in saying they will not apply some allegedly unconstitutional norms in the decree.
Orlando went on to say that he would turn to a judge to raise the issue of whether the decree complies with the Italian Constitution.
He said he hoped raising the issue at a judicial level would lead to the Constitutional Court examining the decree.
The other deputy premier, Salvini's ruling partner Luigi Di Maio of the anti-establishment 5-Star Movement, accused the mayors of indulging in "electoral spots".
"It's just electioneering on the part of mayors who have to feel a bit leftwing by making a bit of noise," said Di Maio, who is also labour and industry minister.
The European Commission has been in touch with some member States to find landing spots for the 32 migrants on board NGO rescue ship Sea watch, an EC spokesman said Thursday, adding that the contacts also concerned another ship, Sea Eye.
The spokesman said Migration Commissioner Dimitris Avramopoulos "directly contacted member States in the last few days".
He said the commissioner "is asking member States to help this joint effort to disembark those on board safely and as soon as possible".