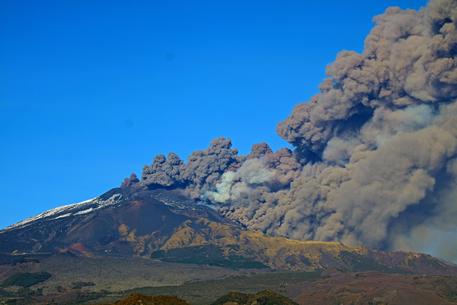 (ANSA) - Catania, December 24 - A new eruptive fracture has opened in Etna's south-east crater, sending up a cloud of ash and forcing the closure of the local airport's air space, local sources said Monday.
Catania airport's air space will be shut from 14:00, its crisis unit decided, the sources said.
In its latest show of pyrotechnics in eastern Sicily, the relatively new crater on the southeastern slope of Europe's tallest active volcano spewed out "sporadic bursts" of lava and ash plumes, volcanologists said.
The national institute for geology and volcanology (INGV) said the latest activity began with an "intense seismic swarm" at 8:50 Monday morning and has so far produced more than 130 quakes, including one of 4.0 magnitude at 13:08.
Catania's international airport, 60 km to the south, has had its air space closed but some flights were still possible, the crisis unit said.
At the moment the airport is accepting four arrivals an hour.
Bigger blowups in the past have shut down the airport completely and covered Catania in ash.