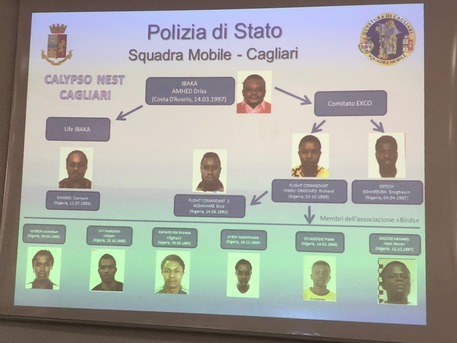 (ANSA) - Cagliari, November 21 - Police in Cagliari on Wednesday carried out several arrests and dismantled an alleged criminal ring linked to a Nigerian mafia clan, the 'Supreme Eye Confraternity', investigative sources said.
The so-called 'Calypso Nest' gang is accused of human trafficking, exploitation of prostitution and drug dealing.
They have also been charged with mafia association, the sources said.
The investigation that led to the police operation kicked off in 2017.
In all, 21 people were arrested and 36 others placed under investigation, police said.
Some 75 kg of drugs were seized.
The gang had humanitarian permits to stay in Italy, police said.