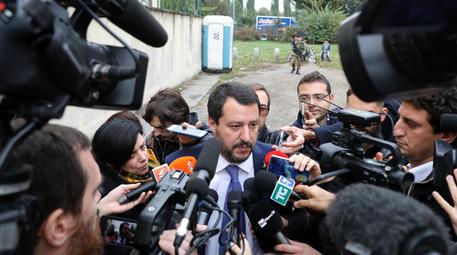 (ANSA) - Pratica di Mare, November 14 - Deputy Premier and Interior Minister Matteo Salvini reiterated on Wednesday that Italy will not back down in its tussle with the European Commission over its budget plan for next year. "There are graphomaniacs in Brussels who write letters to us and we politely respond but we aren't budging a millimetre," Salvini said at Pratica di Mare, near Rome, where the League leader was waiting for the arrival of a group of migrants on a humanitarian corridor. "The European Union, which in the treaties says that full employment and social rights must be guaranteed, is in the wrong.
"If you don't let us spend, how can we guarantee them?". The Commission had told Rome to significantly change the package, which sees Italy running a deficit of 2.4% of GDP next year, saying otherwise it may open an infringement procedure for failing to respect the Stability and Growth Pack. The government, on the other hand, says an expansive budget is needed to finance key pledges and boost growth. Late on Tuesday, Economy Minister Giovanni Tria sent the EC a revised version of the government's draft budgetary plan, accompanied by a letter on the strategy being adopted. But the plan to run a 2.4% deficit was unchanged. Tria wrote there is a "safeguard cushion" that will kick in if the target of 1.5% growth in 2019 is not reached. He said speedy corrections on spending and revenues will be made if there is a deviation.
European Commission Vice President Andrus Ansip repeated Wednesday that Italy must respect the EU's budget rules. "When you're in the eurozone family, you have to respect the rules we have given ourselves," Ansip told ANSA when asked about Rome's reply to the Commission.
"Running up debt with taxpayers' money is not an intelligent idea. "There is an intelligent government in Italy and I hope that they will be capable of finding good solutions for the European Union and the Italian people".
Some of Italy's eurozone partners were critical of the government's stance.
Bloomberg reported that Austrian Finance Minister Hartwig Loeger has said Vienna is ready to support the opening of an infringement procedure against Italy if Rome continues to refuse to change its budget plans. Loeger was quoted as saying that the Italian government is "holding its people hostage" with populist messages. Loeger also said he disagreed with Tria. "On the contrary to what my colleague says, it is not a domestic Italian affair, it's a European affair," he said, according to Bloomberg.
Dutch Finance Minister Wopke Hoekstra said that he was disappointed that the Italian government had not complied with the request from the European Commission. "It is not very surprising but it is very disappointing that Italy has not revised its budget plan," Hoekstra said. "Italy's public finances are imbalanced and the government's plan will not bring robust economic growth. "This budget is a violation of the Stability and Growth Pact.
"We are deeply concerned. Now it is up to the European Commission to take the next steps".