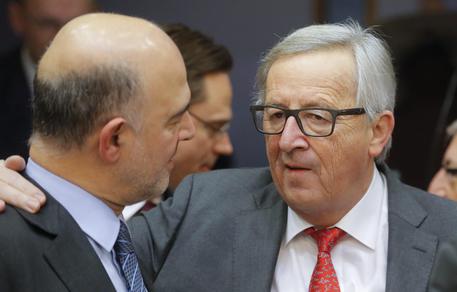 (ANSA) - Brussels, October - The European Commission has decided to reject the Italian budgetary planning document and to ask for a new one which must be sent to Brussels within three weeks, the EC said Tuesday.
European Commission Vice President Valdis Dombrovskis said that the EU executive had no choice but to reject Italy's budget plan. "I'm very sorry to be here today," Dombrovskis told a press conference after a meeting of commissioners. "For the first time the Commission is forced to request a State to revise its budget plan document. But we don't see any alternatives. Unfortunately, the clarification received yesterday was not convincing".
Dombrovskis said "the Italian government is openly and consciously going against the commitments made towards itself and towards the other member States" after rejecting the 2019 budget. In May the European Commission decided not to open an infraction procedure for excessive debt "because Italy was substantially in line with the rules" but "the current plans are a material change that could require a revaluation", Dombrovskis said, saying "the ball is now in the Italian government's court, we have three weeks for an intense dialogue which we face in a constructive way".
Dombrovskis said "breaking the rules may seem a temptation at first glance, it may give the illusion of getting off without consequences", just like trying "to cut the debt with more debt", but "at a certain point the the debt gets so close that it becomes too heavy and ends up not having freedom for all". He said "we have been tasked by all member States with maintaining the common commitments", it is "our duty", because "confidence is crucial".
Dombrovskis said the Italian budget plan risked harming the whole bloc as he explained the decision to give the package the thumbs down. "Europe is built on cooperation. The eurozone is built on close bonds of trust... with rules that are the same for everyone," Dombrovskis told a press conference.
"If the trust is eroded, all the member States are damaged, our union is damaged. "If a looser fiscal policy hits confidence, in reality it can have the opposite effect on growth".
European Economic Affairs Commissioner Pierre Moscovici said that "we are leaving a chance for dialogue". The decision to reject the budget, he said, "doesn't mean that our doors are closed", on the contrary it is an invitation for "constructive dialogue" on which "I welcome (Economy) Minister (Giovanni) Tria's commitment in that direction" in Monday's letter to the EC. "I'm certain the European Commission is not a brake" but "an ally for growth", he said.
Tria remains a "credible interlocutor" even after Italy's budget rejection, Moscovici said. Tria, he said "is still a credible and legitimate interlocutor" and "we hope that he is able to convince the Italian government of the need" that the budget should be "compatible" with EU rules and "the common commitments taken".
Deputy Premier Matteo Salvini said after the EC rejection that "they're not attacking a government, but a people. They are things that make Italians even more irritated and then some people complain that the European Union is at the lowest point of its popularity".
Deputy Premier Luigi Di Maio said the government is on the right track with the budget that was rejected by the EU and won't stop. "We know we are the last bulwark safeguarding Italians' social rights. And that's why we won't disappoint you, WE know that, if we were to give in, the pro-banks and pro-austerity 'experts' would swiftly return. And so we won't give in. We know that we are on the right track. And so we won't stop".
The rejection was widely expected because of what the EC sees as an unacceptably high deficit of 2.4% of GDP next year.
The EC said last week this amounted to an "unprecedented" breach of the Stability and Growth Pact.
The EC also says the budget's growth forecasts are unreasonably optimistic.
The spread between Italian and German 10-year bond yields, a gauge of investor confidence, rose back to 315 points with a yield of 3.55% after the EC's thumbs down.
Premier Giuseppe Conte said ahead of the rejection that "there is no plan B." Taking to Bloomberg, he said "I have said that the deficit at 2.4% of GDP is the ceiling. I can say that this will be our ceiling".
Asked if there might be substantive change to the budget after the EC's No, Conte said "for me that would be difficult, I couldn't accept it".
Conte added that "we are not gamblers gambling our children's future on the roulette wheel" and stressed that "economic growth is the best way to get out of the debt trap".
He added: "I can assure you that this executive will not take Italy out of Europe. We feel at home in Europe and think the euro is and will be our currency, the currency of my son who is 11 and that of my grandchildren".
Conte also said that the government would conduct a spending review if necessary.
"We are ready to make spending cuts in 2019," he said.
There is no turning back on the 2019 budget plan, Deputy Premier Matteo Salvini said ahead of the EC rejection.
"The only organism that can improve the budget is the Italian parliament," he said.
"We're not going to take even a cent from the pockets of the Italians. We listen to everyone but we won't go back".