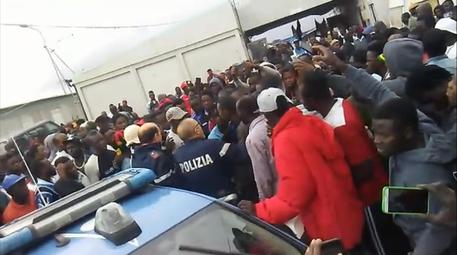 (ANSA) - Foggia, October 10 - Migrants did not attack police officers outside a migrant camp but instead tried to prevent the "brutal arrest" of a 26-year-old Gambian asylum seeker who was handcuffed to the tire of a police car, an organization representing migrant rights said Wednesday, publishing a video on Facebook.
The farm workers' committee 'Campagne in lotta' said there was no "vile aggression" against the officers by some 50 migrants on Monday at the asylum seeker processing center at Borgo Mezzanone after the police stopped the Gambian, Omar Jallow, as police union SAP previously claimed.
In the video, the Gambian man is seen handcuffed to the tire of a police car, agitated and with a wounded arm, while a friend tries to medicate him and a group of migrants is screaming: "Leave him alone, he is not an animal".
Meanwhile on Wednesday Interior Minister and Deputy Premier Matteo Salvini said Jallow, an asylum seeker, will be expelled from Italy in record time.
"Protection denied! These criminal fake refugees" must leave Italy, said Salvini.