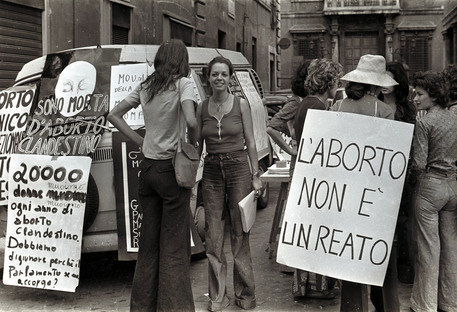 (ANSA) - Verona, October 5 - Verona city council on Thursday night approved a rightwing League motion declaring Verona "a pro-life city" and funding Catholic anti-abortion groups, sparking a storm of reaction.
During the vote, the women's group Non Una Di Meno (Not One Woman Less) protested wearing dresses from the TV adpatation of Margaret Atwood's dystopian novel The Handmaid's Tale. Verona MP Alessia Rotta of the centre-left opposition Democratic Party (PD) said "in the night Verona and its women citizens were hit by an unacceptable slap in the face".
She said "the vote took us back to years when women died of widespread backstreet abortions".
PD deputy chair Barbara Pollastrini said the vote "represents a symbolic and grave step backwards with respect to a serious and important law like the 194 (abortion law of 1975)". She urged the PD council leader, who voted with the League, to apologise for supporting the motion.
PD bigwig and Lazio Governor Nicola Zingaretti said "you don't respect life if you don't respect the choices of women, especially when they are difficult like an abortion.
"Italy has a serious law, the 194, which must be applied".
Zingaretti said the Verona vote "is not on. You can't proceed with ideological coups de main on such delicate issues".
Monica Cirinnà, sponsor of last year's civil unions legislation, said "I'm disgusted" and, referring to the PD caucus leader's vote, added: "The PD must be more leftwing".
PD leader Maurizio Martina said "hands off the 194, there can be no ambiguity...no return to the Middle Ages".
The anti-migrant Euroskeptic League is in government with the anti-establishment 5-Star Movement (M5S).
The League's Family Minister Lorenzo Fontana is pro-life.