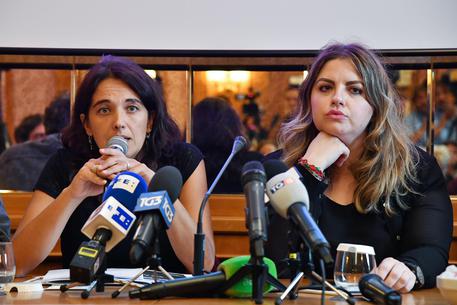 (ANSA) - Rome, October 4 - Deputy Prime Minister and Interior Minister Matteo Salvini reiterated Thursday that no ships intending to disembark migrants would be allowed to land in Italy.
He said he knew that a ship run by leftist, anticapitalist and anarchist squats called social centers was "wandering around the Mediterranean for a humanitarian mission and that it will try to disembark migrants in Italy. Do what you want, go wherever you want. I am democratic. Go to Tunisia, Libya or Egypt, but not to Italy. You can pick up whomever you choose but you will not be coming to Italy." He was commenting on an initiative in which some MPs from the leftwing Free and Equal (LeU) party are taking part.
The ship has been named Mediterranea. The mission has been launched by several Italian associations - including Arci Nazionale, Ya Basta of Bologna, the NGO Sea-Watch, the online magazine I Diavoli and the social enterprise Moltivolti of Palermo - and is supported by representatives of the world of culture and social entities. The main boat will be accompanied by a schooner that will support the various operations.
"When the law creates death, it is our duty to disobey," organisers said.