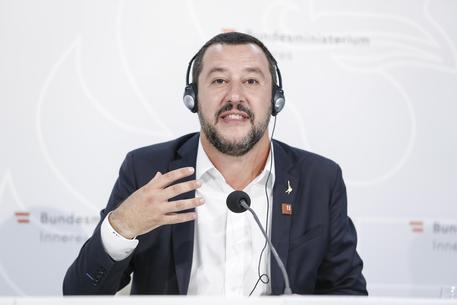 (ANSA) - Rome, September 14 - Italian Deputy Premier and Interior Minister Matteo Salvini said Friday that Malta didn't "give a damn" about its migrant rescue duties and was instead steering boats into Italian waters.
Salvini also that he was ready to sign an agreement with Germany on the return of migrants if Berlin helps it get the terms of the Sophia mission in the Mediterranean overhauled.
Salvini, who has spearheaded the new government's tough stance on migration which has seen NGO-run rescue ships denied access to Italy's ports, says Sophia placed too much of the burden for receiving asylum seekers saved at sea on Italy.
The German government said that it reached a deal with Rome for the return of migrants registered in Italy at the German border but Salvini said Thursday that the agreement has not yet been finalised.
"The agreement with Germany, which I have not signed yet, will be limited to November and will be at zero cost," Salvini said regarding the deal that would see Germany accepting one rescued migrant from Italy for each one it turns back.
"It won't regard past cases and it will be signed if Germany gives us a hand on changing the rules of the Sophia mission, which, because of the government of (ex-premier Matteo) Renzi, has seen 45,000 people disembark in Italy.
"I'm ready to sign, but it must be favourable to us". Italy wants the Sophia landing remit to be expanded so that ports outside Italy are also included.
Salvini denied German assertions that the migrant return accord had already been "clinched".
Salvini declared that Malta "doesn't give a damn" about its migrant rescue duties, to the detriment of EU solidarity and to Italy.
"There is an (EU) member State that is very much not giving a damn about its duties, with repeated cases of multiple ships, also in difficulty in Maltese waters, ignored and accompanied towards Italy, ignoring solidarity," he said.
Further, Salvini said Salvini said he would soon go on a mission with European Migration Commissioner Dimitris Avramopoulos to African countries which migrants leave from.
Addressing a press conference in Vienna with Austrian counterpart Herbert Kickl, Salvini said "we agreed with European Commissioner Dimitris Avramopoulos on joint missions to African countries migrants leave from to drive home the message that Italy and the EU have no intention of allowing more arrivals, as for example the 57,000 Nigerians of the last year and a half", Salvini said.
Salvini also said migrants could be identified on board rescue ships to facilitate so-called "lightning repatriations".
Speaking with Austrian counterpart Herbert Kickl, he said the migrants would be directly taken to origin countries with which there are relevant accords.
"Among the new innovative and effective measures we can't rule out an identification on the ships, once migrants have been rescued from the boats," said Salvini.
Salvini added that Luxembourg Foreign Minister Jean Asselborn used "vulgar" language in a verbal spat with him earlier.
"We are awaiting in a few minutes' time the Luxembourg minister to continue the debate with calm tones, he was vulgar before," said Salvini, flanked by Austrian counterpart Herbert Kickl.
Earlier Salvini said "we don't need to have new slaves to replace the children we no longer produce" and Asselborn swore "merde alors", a vulgar expression meaning "drat", before saying "deal with your money to help feed your children".