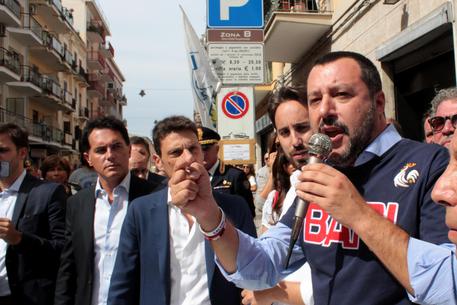 (ANSA) - Rome, September 13 - Interior Minister and Deputy Premier Matteo Salvini on Thursday returned to the controversy caused by an announcement by Michelle Bachelet, the United Nations' new human rights chief, that the UN wants to send a team to Italy over reports of migrants increasingly facing attacks and racism. "The only racists that I know are some leftwing politicians who have transformed Bari and Italy into a refugee camp," Salvini said during a visit to the southern city of Bari.
"They are racist against Italian people". The leader of the rightwing League party also commented on the case after meeting Filippo Grandi, the United Nations High Commissioner for Refugees, at the interior ministry in Rome.
"We cooperate to solve problems, the total opposite of the racism alarm denounced by some ignorant people who don't know Italy and its splendid people," Salvini said.