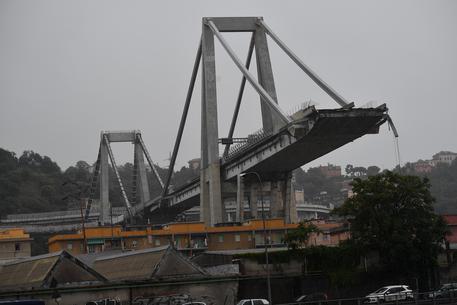 (ANSA) - Genoa, August 14 - Fire brigade sources said that, up to now, 35 people are dead after a section of a highway bridge in Genoa collapsed on Tuesday. Five injured people were in hospital in a serious condition.
Many victims were in crushed vehicles, rescue sources said. Four people were pulled out alive, rescue sources said. A child is among the victims, police sources said.
Civil Protection Chief Angelo Borrelli said Tuesday that 30 to 35 cars and three lorries were travelling on the Genoa highway viaduct when it collapsed, killing many people. Some lorries ended up in the Polvecera river, Carabinieri police sources said.
The Morandi viaduct upon which the A10 motorway runs gave way amid torrential rain. The bridge collapsed after being hit by lightning, some eye witnesses said on Tuesday. "It was just after 11:30 when we saw the lighting bolt hit the bridge and we saw the bridge go down," Pietro M. told ANSA.
The bridge runs over shopping centres, factories, some homes, the Genoa-Milan railway line and the river.
One rescuer said that there was a risk the other sections of the Genoa viaduct could cave in. "There is a risk the other parts of the bridge could fall," one of the rescuers said.
"That's why we have evacuated people from the buildings in the area".