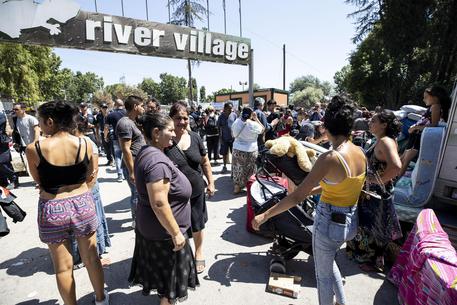 (ANSA) - Rome, July 26 - Rome Mayor Virginia Raggi on Thursday hailed the clearance and closure of the Camping River Roma camp in the capital. "Legality and the protection of people's rights are the principles upon which our efforts to go beyond Roma camps is based," Raggi, a member of the anti-establishment 5-Star Movement (M5S), said via Facebook. "As of today, Camping River is closed.
"It is unacceptable to keep financing places like this which aid ghettoisation and, above all, where the living conditions do not protect the rights of children, women and men. "A third way based on inclusion, the respect of legality, the protection of rights and the respect of obligations is possible". The European Court of Human Rights had called for the clearance of the site to be suspended after an appeal by three inhabitants. The Rome city council sent the court the information it requested about this issue and has said the clearance was necessary due to sanitary problems.
Some residents of the camp staged protests outside the camp and said they had been mistreated.
"This morning they came to throw us out. They treated us like animals," said Florin, a 31-year-old resident of the camp.
"There was violence. They pushed the women and used pepper spray on a lady.
"Some people fainted. The women were screaming". Deputy Premier and M5S leader Luigi Di Maio, however, said that the clearance of the camp was legitimate.
"We have spoken to the local police and they have denied that any type of clash took place," said Labour and Industry Minister Di Maio. "The clearance was peaceful and I consider it legitimate". The first family to leave the camp, a household of five people, were set to be received at a facility provided by the council that will enable them to stay together. At the moment, 24 people have accepted an offer to be housed at structures provided by the council's social services department, in addition to those who had already left the site.