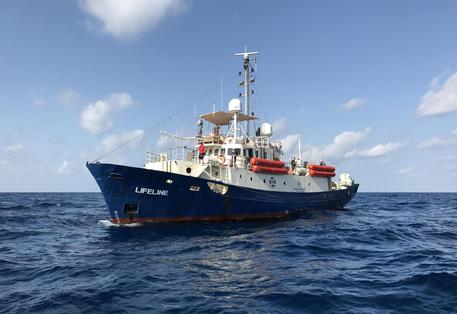 (ANSA) - Rome, June 21 - Interior Minister Matteo Salvini and Transport Minister Danilo Toninelli both launched high-voltage attacks on German NGO Mission Lifeline on Thursday after its ship rescued over 200 migrants off the coast of Libya. "The Lifeline NGO ship is operating in Libyan waters outside all rules, outside international law," Toninelli, whose brief includes control of Italy's ports, said on Facebook.
"They have taken on 250 boat-wreck victims even though they don't have the technical means to guarantee their safety or the safety of the crew," he added, saying he had asked the Italian Coast Guard to launch a probe.
Interior Minister Salvini said the Lifeline should not expect to have access to Italy's ports. "Have you forced things by not listening to the Libyan and Italian coast guard? Fine, then you can take this load of human beings to Holland," Salvini said on Facebook about the Lifeline, which was reportedly Dutch-flagged. "Take the long route". Salvini has spearheaded the tough stance on migrants of the new League/5-Star Movement (M5S) government that saw migrant-rescue ship Aquarius, which is run by another NGO, have to travel to Valencia last week after it was denied permission to dock in an Italian port.
The Netherlands said Thursday that it is not true that the Lifeline and another NGO-run migrant-rescue ship, the Seefuchs, are sailing under Dutch flags.
"The Seefuchs and Lifeline are not sailing under Dutch flag as per UNCLOS (United Nations Convention on the Law of the Sea) flag state responsibility," the Netherlands representation at the EU said via Twitter.
"These ships are owned by German NGOs and not entered into the NL ships register.
"So NL is not able to give instructions to these ships. Italy is aware of the Dutch position.
"We explicitly share Italy's concerns about the sustained irregular flow of migrants who cross the Mediterranean Sea, the unintended side effects of rescue operations and the precarious position of Italy as first country of arrival," it added in a subsequent tweet. "Solidarity is required".
Mission Lifeline NGO, meanwhile, denied that its rescue was illegal and called for a port of safety to be assigned.
"LIFELINE urges a Port of Safety for 224 people rescued in international waters, in line with international law," it said via Twitter. "The LIFELINE was the best equipped asset on scene, due to a situation in need of immediate response, ppl had been taken on board.