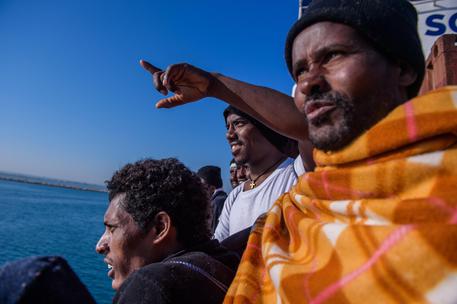 (ANSA) - Rome, June 11 - Spain on Monday said it would take in a German NGO ship with 629 migrants on board after Italy's new populist government blocked it from Italian ports on Sunday.
The Aquarius will be allowed to dock in the Spanish port of Valencia, Spanish Premier Pedro Sanchez said Monday, spurring Interior Minister Matteo Salvini to say "raising your voice pays".
The decision ended a stand-off between Italy and Malta after Salvini, leader of the anti-migrant League party, said the ship run by SOS Mediterranée could not dock in Italy and said Valletta should take it.
Malta refused, saying the migrants were picked up off Libya in an area that is Italy's competence.
After Sanchez's statement, Salvini said: "Evidently raising your voice, something Italy did not do for years, pays".
He said: "Victory. 629 migrants on board the ship Aquarius heading for Spain. First objective achieved.
"We have opened a front in Brussels, with (Foreign) Minister (Enrico) Moavero (Milanesi) we are contacting the European Commission so that it can fulfill its duties towards Italy that have never been respected.
"It doesn't make much difference if the ship is called Aquarius or Sea Watch 3: we want to put an end to this traffic of human beings. "And so as we did for Aquarius we will raise the problem for the other ships", Salvini said, indicating that all migrant ships would be denied permission to dock in Italy.
Salvini said Monday the government had been "compact" and denied there had been "splits" with government partner the anti-establishment 5-Star Movement (M5S) over the Aquarius.
Italian Premier Giuseppe Conte thanked Spain. "I'd asked for a gesture of solidarity by the EU about this emergency," Conte said during a visit to the earthquake-hit village of Accumoli.
"I cannot fail to thank the Spanish authorities for taking up the invitation.
"This decision goes in the direction of solidarity".
European Migration Commissioner Dimitris Avramopoulos hailed Premier Sanchez's decision.
"We welcome the Spanish government's decision to let the ship Aquarius land in Valencia for humanitarian reasons," he said. "This is true solidarity put into practice, both towards these desperate and vulnerable people and towards partner member States".
French far-right leader Marine Le Pen hailed Salvini's stance.
Saying "he is right", she said "only a policy of firmness will enable us to put an end to the mass arrivals of illegals and stop those who organise this hateful traffic in human beings".
Spain's offer came amid fears conditions could deteriorate among the migrants on board the ship.
Doctors Without Borders (MSF), which has doctors on the ship, said vulnerable people were at risk. MSF said the situation on board was "stable" but the "useless delays" in offloading the migrants "are putting at risk vulnerable people" and in particular seven pregnant women and 15 burns victims, as well as several migrants with symptoms of hypothermia.
UNHCR, the UN agency for refugees and migrants, called on Italy and Malta to allow the immediate landing of the migrants, who were picked up by several ships including Italian navy vessel and transferred to the Aquarius on Saturday.
"There is an urgent humanitarian imperative here," said Vincent Cochetel, UNHCR's Special Envoy for the Central Mediterranean. "People are in distress, are running out of provisions and need help quickly. Broader issues such as who has responsibility and how these responsibilities can best be shared between States should be looked at later." "Fundamentally, the principle of rescue at sea must not be put into doubt through incidents like this. "Other governments must act to support countries dealing with sea arrivals. "This could include a predictable mechanism across the region for disembarkation, based on good cooperation amongst states and other relevant actors," Cochetel added.
Salvini's action came under fire from many Italian political parties and from the Vatican.
Cardinal Gianfranco Ravasi, the president of the Pontifical Council for Culture, quoted the gospel of Matthew. "I was a stranger and you did not invite me in (Matthew 25 43) #Aquarius," Ravasi said via Twitter on Monday.
But the other government partner, the anti-establishment 5-Star Movement (M5S), defended Salvini's decision.
M5S bigwig and Infrastructure Minister Danilo Toninelli said that Italy's stance was "not inhumane". He told Sky Tg 24 that the stance was "good sense and has at the centre the asylum seekers". "Redistribution must be guaranteed. It is an obligation of the European partners," he added.
"We call on all of Europe to take responsibility on an issue that is as delicate and important as migrant flows. "It is necessary for everyone to understand that international law cannot entail Italy being abandoned.
"We'll always save human lives, but Malta is the warning light of a Europe that must change".
Toninelli, an M5S Senator, said that the government had sent doctors to the Aquarius and said that "conditions aboard are good". Salvini himself was undeterred and said he would block another migrant ship. The interior minister and deputy premier, who has vowed to deport half a million migrants, said: "Today the Sea Watch 3 ship of a German NGO flying a Dutch flag is off the Libyan coast waiting to take on the umpteenth load of immigrants to bring to Italy again". "Italy has stopped bowing its head and obeying, this time THERE IS SOMEONE WHO SAYS NO. #chiudiamoiporti (#weareclosingtheports)". On Monday the Aquarius, which also has 123 unaccompanied minors on board, was stationary at sea, 27 nautical miles from Malta and 35 from Italy, awaiting instructions. "Early morning prayers onboard #Aquarius. All 629 people rescued in #Mediterranean are unaware of ongoing diplomatic standoff," said MSF.
"#MSF urgently requests a swift resolution and a designated port of safety".