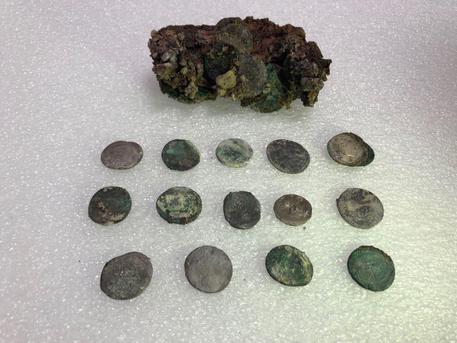 (ANSA) - Pompeii, June 1 - Archaeologists on Friday said they had found what they called the "treasure trove" of Pompeii's 'last fugitive', whose skeleton was discovered earlier this week with its head knocked off by a huge stone in the eruption.
Twenty silver denari and an iron key, probably his house key, were found in a leather pouch under the skeleton of the man with a limp who died gazing at the burning storm of ash and rocks that was heading his way, Pompeii director Massimo Osanna told ANSA. "Twenty silver coins equivalent to 80 sesterces, and 500 euros today, was a sum that an average family in Rome could live well on for two weeks on", Osanna said.
Having a similar sum on him, Osanna went on, "makes us think that he wasn't filthy rich but neither was he a poor man.
"He was, perhaps, a merchant, who because of the sick leg hadn't been persuaded to leave the city in the preceding hours, when almost everyone else had done so." The archaeologists spotted the remains of the bag when they moved the skeleton to take it to a laboratory, Osanna told reporters.
"Underneath the smashed-in rib bones in his thorax some organic material was glimpsed, as well as some ferrous oxide," he said.
Then the coins were discovered.
"They are silver ones, but belonging to different eras," said Osanna.
Now the examination of the trove is continuing in the laboratory, where the skeleton, the remains of the pouch, the remains of the key and the coins have been taken to try to shed further light on exactly what happened on that day in the doomed city 1,900 years ago.
Experts will first of all try to establish the man's physical condition (broken leg, disabled leg following an untreated fracture, real age, etc), as well as the history of the objects.
Some tests have already been assigned to a Policlinico di Napoli team.
After the exceptional find of the skeleton, Osanna said, this further discovery "is of great value" alongside the work being done on new digs.
"It is the objects, and the context of the man's life, that can supply us with the real details on the lives and stories of the people of this city".