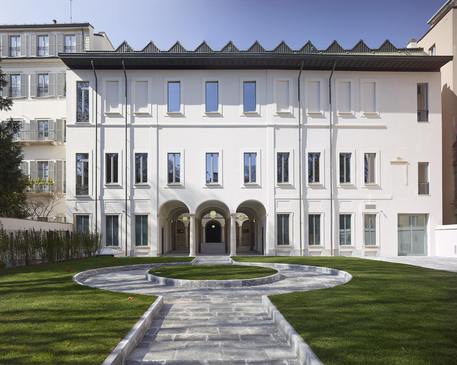 (ANSA) - Milan, April 11 - Some 40 years of vicissitudes later, Palazzo Citterio will become part of the Brera Art Gallery with its over 6,500 square meters of modern and contemporary art. The official handover to museum director James Bradburne is expected to come in June after all the various systems installed have been tested, the culture ministry's Lombardy region museum chief Marco Minoja said during the presentation of the restoration. Then the Brera Modern will begin being set up, with twentieth-century collections from the art gallery and such works as Carlo Carrà's 'Allegory of Work', which the ministry purchased last year. "If the building is handed over by June, after the necessary checks to ensure that everything is in order, " the director said, "we will be able to open it within the following year and a half, since we are not thinking about a summer opening." Thus it is likely to open in the autumn of 2019, he continued, with a preview on November 22 for the 'Brera Listens' exhibition. Much work remains, he noted, since the building "must now be turned into a museum", focusing on exhibition spaces and whether they can hold such large works as Giuseppe Pellizza da Volpedo's 'Fiumana', an enormous work measuring 255x438 and whether the storage space will be sufficient. The residence, located near the Accademia, has been entirely restored, both the historic sections of the piano nobile and the more recent halls built in the 1970s and designed by Giancarlo Ortelli and Edoardo Sianesi, with help from Franco Russoli, and the parts of the Striling-Wiford project. The work was completed in about three years thanks to funding by the cultural ministry as part of the 'Grande Brera' project. "We cannot say that it was brief," culture ministry undersecretary Ilaria Borletti Buitoni. "But today we see that a path undertaken in 1972 has ended happily." "This palazzo is an important step towards the 'Grande Brera'," she continued. Milan mayor called it a "an incredibly beautiful exhibition space, while Milan superintendent Antonella Ranaldi added that the restoration work coordinated by the architect Amerigo Restucci "have given Palazzo Citterio, which has been brought back to life, back to the city. This is what we had aimed for".
Taking part in the presentation of the palazzo was also museum director Bradburne.
He did not speak during the press conference, however.
"I came here only two years ago," he said on the sidelines of the event. "Today is a day to celebrate the work and commitment shown over the past 40 years. It was not appropriate for me to speak. Of course I was here during the works, but the restoration was managed by the superintendent's office. The merit and responsibility is theirs."