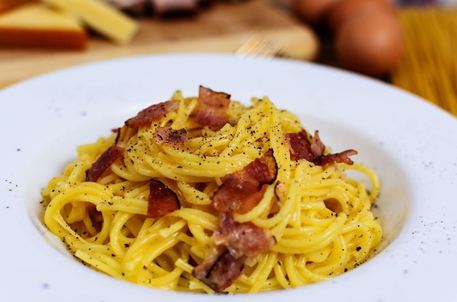 (ANSA) - Milan, April 5 - On Friday, April 6, the world will celebrate "Carbonara Day", an occasion launched by the Italian Association of Confectionery and Pasta Industries (AIDEPI) and the International Pasta Organisation (IPO), to celebrate the dish made famous in Italy.
The first edition of Carbonara Day, held in 2017, involved 83 million pasta lovers, according to AIDEPI and IPO.
They said in last year's event, 29,000 people exchanged opinions and recipes on social media regarding the dish, which has gone international.
"Everyone has their secrets, and the perfect carbonara is a challenge that excites every chef," said AIDEPI President Riccardo Felicetti.
"We wanted to celebrate this dish in order to go beyond the ideal recipe. There are excellent carbonaras that include the 'wrong' ingredients. They are proof of how well-known carbonara is throughout the world," Felicetti said.
Organisers are promoting the hashtag #carbonaraday, which will be used in a virtual event involving bloggers, journalists, food influencers and chefs.
Italy is celebrating the famed egg-and-bacon-sauce spaghetti dish amid a heated debate on the 'real' recipe and way of cooking it.
Carbonara is perhaps the most loved and imitated pasta dish in the world but also the most controversial.
Purists say that only pork tongue and not bacon or even pancetta should be used, while enthusiasts are about evenly divided over whether to add pecorino or parmigiano cheese.
Other divisive issues are whether to leave the egg white in with the yolk and whether to add garlic or onion, and whether other types of long pasta like bucatini or even short pasta such as rigatoni can be used instead of spaghetti.
IPO and AIDEPI, while feting this culinary glory, are also bidding to settle some of the vexed questions about how to make it.
Follow the hashtag and you can join a debate that will see bloggers, food influencers, journalists and chefs have their say on the dish and more generally on the relationship between tradition and innovation or fusion in cuisine.
Italian traditionalists insist there are only five carbonara ingredients: pork tongue, pecorino, eggs, salt and pepper.
Innovators think that, since pasta is such a versatile dish, there should be no limits on how carbonara can be interpreted, going as far as "culinary science fiction", according to detractors.
In France and Germany, for example, powdered ingredients are on sale for preparing a carbonara; in Britain the egg is often replaced by bechamel sauce; and in Japan chefs regularly add cream and take out the pecorino - an affront to tradition according to purists.
Traditionalists say there are five common mistakes in preparing carbonara.
If pork tongue and pancetta can be interchangeable, they maintain, would-be carbonara buffs must avoid at all costs that the egg becomes an omelette by cooking it in a frying pan and solidifying it.
They should never, furthermore, replace pecorino with parmigiano or, an even worse sin, add cream, an ingredient that makes the mix too oily and, purists say, makes it taste too bland.
Finally, whatever French cooks have to say on the matter, garlic and onion must be banned, since they are a superfluous addition given that carbonara is already such a strongly accented dish.
As with many recipes, the origins of the dish and its name are obscure.
There are many theories for the origin of the name, which may be more recent than the dish itself.
Since the name is derived from carbonaro (the Italian word for charcoal burner), some believe the dish was first made as a hearty meal for Italian charcoal workers.
In parts of the United States the etymology gave rise to the term "coal miner's spaghetti".
It has even been suggested that it was created as a tribute to the Carbonari ("charcoalmen"), a secret society prominent in the early, repressed stages of Italian unification.
It seems more likely that it is an urban dish from Rome, probably first described after WWII in the Italian capital, when many Italians were eating powdered eggs and bacon supplied by troops from the United States.