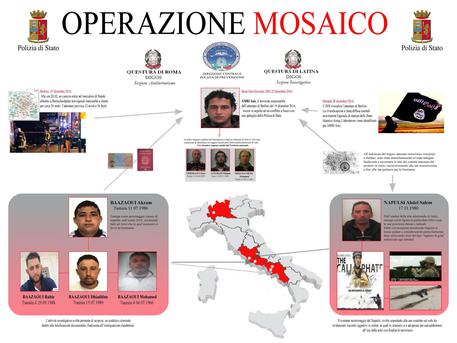 (ANSA) - Rome, March 29 - Italia police said Thursday that they have arrested five people in Rome and Latina accused of being linked to Anis Amri, a Tunisian who carried out the 2016 Berlin Christmas-market truck attack in which 12 people were killed.
Amri was subsequently killed in a shootout with Italian police at Sesto San Giovanni, near Milan, on December 23, 2016.
Amri hijacked a truck and drove it into a crowded market - an attack that the Islamic State (ISIS) group claimed responsibility for. The people arrested on Thursday are accused of training and other activities for international terrorism and criminal association to falsify documents and aid illegal immigration.
In addition to the arrests, properties were searched in the provinces of Latina, Rome, Caserta, Naples, Matera and Viterbo as part of the operation. Rome Prosecutor Sergio Colaiocco said that the suspected Islamist extremists were detained before they started preparing a terrorist attack. "It (the operation) stopped the radicalization phase from developing into terrorist activity," Colaiocco told a press conference. "There is no concrete element to suggest that they were preparing an attack but there are elements that suggest they were getting ready for this". The arrests come after two other big operations over the last few days targeting suspects allegedly linked to ISIS in Italy.
Interior Minister Marco Minniti called for an ulterior reinforcement of security checks at crowded places "in view of the Easter holidays" at an extraordinary meeting of the Committee of Strategic Antiterrorism Analysis (CASA) on Wednesday follow the terror-linked arrests. An Italo-Moroccan accused of belonging to the Islamic State (ISIS) Islamist terror group was arrested in Turin on Wednesday and police said he had been planning to use trucks for attacks and seeking 'lone wolves' to carry them out. Elmahdi Halili, 23, the author of the first ISIS propaganda message in Italian, was captured at the end of a probe by anti-terrorism police in the northwestern Italian city. At the moment of his arrest, Halili reportedly shouted.
On Tuesday in Foggia an Italo-Egyptian was arrested on charges of teaching children to kill for jihad. An Italian teacher from Foggia who works in Ferrara has been placed under investigation in that probe, judicial sources said Wednesday. The teacher is said to have converted to Islam. In an interview with La Stampa newspaper Wednesday, Minniti said "the picture of the ISIS threat remains unchanged".