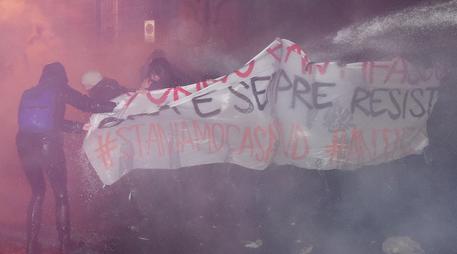 (ANSA) - Turin, March 19 - Police conducted several arrests and searched the homes of a number of suspects on Monday in relation to a probe into clashes last month at an anti-Fascist protest in Turin. Among the suspects whose home was searched was Lavinia Flavia Cassaro, an elementary school teacher who is under investigation and risks getting the sack after insulting police at the rally. Cassaro shouted "Cowards, you must die, Fascists" at the police who were separating anti-Fascist protesters from a neo-Fascist CasaPound rally. Cassaro said she was not wishing death on the officers but on "the apparatus that defends Fascism". Three activists linked to the Askatasuna leftwing centre were arrested in Monday's operation, including one person put under house arrest, and four others have been notified they must regularly sign in with the authorities, sources said.
Police were attacked with bottles and cherry bombs containing nails during the protest.