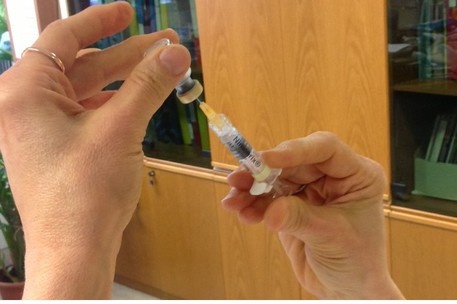 (ANSA) - Milan, March 12 - Several children were sent back home on Monday after a deadline for pupils to comply with a new law making vaccinations obligator for admission to schools and nurseries passed at the weekend.
Four children under six were unable to enter public nursery and infants schools in Milan because they are not in compliance, city sources said. They said around 10 children were non-compliant but, of those, five or six had been absent since the end of last week due to flu.
Some of the parents of the children affected said they had not had time to get the vaccinations done, sources said. A manager at a school in Sulmona, near the central city of L'Aquila, said Monday that four pupils there had been sent home because too. "They are four different cases," said Elvira Tonti of the Serafini - Di Stefano Institute. "Two are on the way to being resolved because they were caused by simple forgetfulness and will be sorted by tomorrow.
"The other two, on the other hand, have refused to vaccinate their children".
Several dozen" children were sent home in Sardinia for failing to comply with the new vaccination rules, sources said. The deadline for presenting certificates for 10 compulsory vaccinations passed on Saturday.
"It's impossible to say exactly what the number is," Cagliari provincial schools chief Luca Cancelliere told ANSA, "but many reports are coming to school principals".
In the small town of Elmas outside Cagliari alone, there were 40 children without authorisation, he said.
Last week it was estimated that around 30,000 children are not in compliance with the law. Giovanni Rezza, the head of the infectious diseases department of Italy's Higher Health Institute (ISS), said Monday that the goal of the government decree making vaccinations obligatory for admission to public nurseries and schools has been achieved. "We have over 95% of children vaccinated for the six-in-one vaccine, so the threshold that makes it possible to have collected immunity has been reached," Rezza said. "We've had an increase of about 6% for the measles (vaccine) so we are close to that threshold in this case too. "The numbers show that vaccinations have increased and this was the objective of the decree, not to punish parents who fail to comply. "Vaccines, above all, are a right".