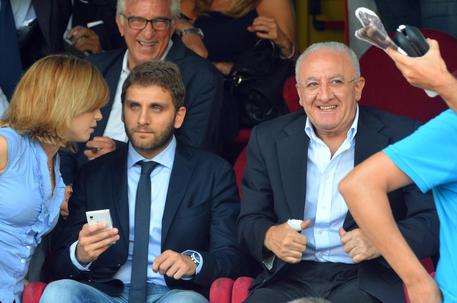 (ANSA) - Salerno, February 20 - Roberto De Luca, son of Campania Governor Vincenzo, has resigned as budget councillor in Salerno where his father was mayor for many years, Mayor Vincenzo Napoli said Tuesday. De Luca Jr has been caught up in a probe into illegal waste trafficking, which he denies.
Meanwhile Vincenzo De Luca, the Campania governor, said he would sue anti-establishment 5-Star Movement (M5S) leader Luigi Di Maio for allegedly slanderous statements on the case. Mayor Napoli, who belongs to the same Democratic Party (PD) as the De Lucas, said "our political opponents are using all instruments for facile and easy propaganda." He said "Roberto De Luca, with a gesture worthy of a great man, of great intellectual honesty and of great responsibility, has resigned as councillor".
Vincenzo De Luca, the governor, on Monday railed against the alleged "camorra and fascist-thug-like tactics" used by perceived enemies including Fanpage.it, which broke the story, and the M5S, which has called on the elder De Luca to resign too.
Campania Governor De Luca said later Tuesday he would sue M5S leader Di Maio for his alleged slander. "I have instructed my lawyers to sue Luigi Di Maio for the statements made yesterday and in previous days," said Vincenzo De Luca on Di Maio's calls for him to quit.
"I urge Di Maio, an authoritative member of the caste paid 15,000 euros a month, to renounce his parliamentary immunity.
"We will renew the request every day until the (March 4) general election.
The case has embarrassed the PD in the run-up to the elections.