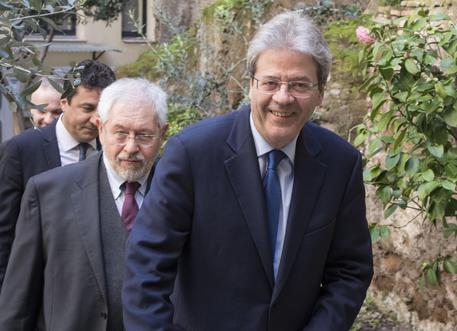 (ANSA) - Rome, February 19 - Ruling centre-left Democratic Party (PD) Premier Paolo Gentiloni made a key electoral move on exempting more elderly from the RAI State broadcaster license fee Monday but Free and Equal (LeU) leader Pietro Grasso said the PD man could not be premier after the March 4 elections, having rammed though a "fraudulent" electoral law.
Meanwhile former PD mandarin, ex-premier and LeU bigwig Massimo D'Alema said it was "lunacy" to think that the PD could win the general election.
And on the right, anti-migrant, Eurospetic League leader Massimo Salvini reiterated to his alliance partner Silvio Berlusconi that if the billionaire's Forza Italia (FI) gets one vote more than the League, then the three-time former premier and media magnate gets to choose who will be premier.
Gentiloni said Monday that 350,000 over-75s would be exempted from paying the RAI State broadcaster license fee. The number is thus raised from 115,000 at present, he said. A decree was just signed at the industry ministry, the premier said.
Gentiloni said this would mean "significant" relief for Italy's elderly.
But Grasso came out against the widely touted possibility of Gentiloni remaining as premier after march 4, in the likely event of a hung parliament.
The LeU leader criticised the PD premier on the country's controversial election law, on the sidelines of an election event on education and research in Bologna. "Let's not forget that Gentiloni is the one who put three confidence votes to the Lower House and five to the Senate to approve a fraudulent election law, because as we have seen, it gives a vote to one list and others from another list are elected," Grasso said.
The so-called Rosatellum 2 election law, a mix of first-past-the-post and proportional representation, has a ballot slip that critics say may sow confusion among voters. The former Senate Speaker added that it was "premature" to talk about the LeU reuniting with the PD to form a single centre-left bloc.
Meanwhile D'Alema, the former centre-left premier, said it was "lunacy to think that the PD can win the election" with it trailing badly in the last polls out Friday before a pre-election ban on polling.
On the right, League leader Salvini meanwhile told Berlusconi, reaffirming their pre-election deal: "if you get just one more vote than me then you can choose the premier".
Salvini, whose party was trailing FI by about three points in the last polls, is running as premier candidate but Berlusconi cannot run because of a tax-evasion-linked office ban that runs out next year. The media magnate turned politician has touted European Parliament President Antonio Tajani to be FI's premier candidate. Polls said Friday the centre-right alliance would win but not get enough to form a majority.