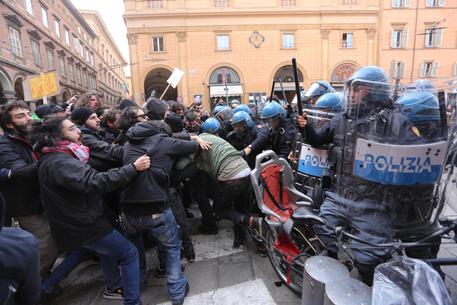 (ANSA) - Bologna, February 16 - Four students and a policeman were hurt in clashes between leftists and police in Bologna Friday. The students, who were hit by police batons, had to be treated by doctors, while the policeman was slightly injured, local sources said.
Police clashed with anticapitalist youths in the northern city amid protests against a rightist extremist leader's planned rally in the traditionally leftwing city.
Around 100 students and 'antagonists' were pushed out of Piazza Galvani with several baton charges, by police in riot gear.
The leftists, anticapitalists and anarchists had been staging a sit-in in the square, protesting a scheduled rally by far-right Forza Nuova (FN) leader Roberto Fiore in Bologna Friday evening.
Fiore is campaigning for the March 4 general election.