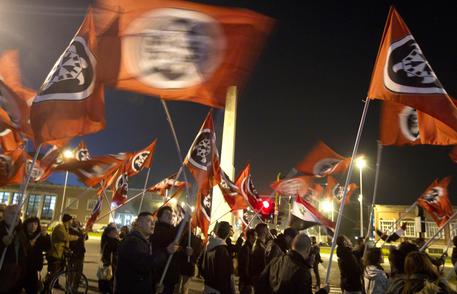 (ANSA) - Rome, February 9 - Some of Italy's most extreme rightist and leftist groups are set to march amid fears of clashes Saturday, the day Italy remembers the 'Foibe' massacres of Italians by Tito's partisans at the end of WWII.
One of the most closely watched cities will be Turin, where the far-right Forza Nuova and CasaPound groups said Friday they would march, defying a mayor's call. At the same time, anti-Fascist and anticapitalist groups said they would march, at different times.
In Rome, CasaPound leader and premier candidate Simone Di Stefano said allowing extremist leftist marches on the Foibe anniversary was "fanning the flames" when tensions are already high over a racist shooting in Macerata.
"We don't want clashes, on the contrary we want to tone things down and get to the (general election) vote (on March 4) in a calm way.
"The interior ministry must guarantee that".
Extreme nationalism poses "extremely serious risks", President Sergio Mattarella said Friday in a message for the Day of Memory on the Foibe Saturday.
"The massacres, the violence, the suffering of Giulian, Istrian, Fiuman and Dalmatian exiles cannot be forgotten, underplayed or removed," said the head of State about the 1943-7 massacres in northeast Italy, some of which is now Croatia and Slovenia. "They are part, rightfully, of our national history and are an indelible chapter in it, which warns us on the extremely serious risks of extreme nationalism, ethnic hatred, and ideological violence erected into a system".
Saturday is the National Day of Remembrance for the foibe, the deep mountain pits into which victims were thrown, sometimes alive and sometimes after being shot, and bound together with barbed wire.
Some 15,000 Italians living in the Istrian peninsula, in today's Slovenia and Croatia, are believed to have died in the narrow mountain gorges used to execute perceived enemies of the Communist government of then-president Josef Tito.
Italians who had lived for centuries in the regions of Istria, Fiume and Dalmatia were attacked by Slovene and Croatian partisans, some in reprisal for Italian occupation of Istria during the war and others blamed for Fascist activities.
The killings creating long-lasting tensions in relations between Italy and the present republics of Croatia and Slovenia which were accused of dragging their feet over compensation for exiles.
The Foibe issue also split the Italian political world with leftwing parties accused of airbrushing the episode for years when only the right recalled the victims.
February 10 was set up as National Memorial Day of the Exiles and Foibe in 2004 to unite Italians in remembering the victims.
photo: a CasaPound rally