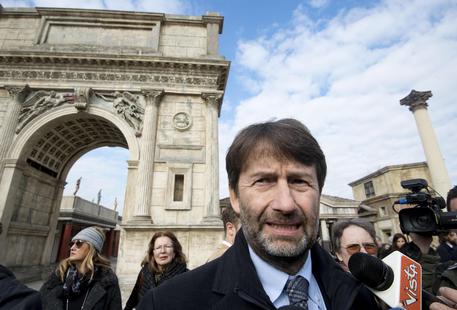 (ANSA) - Rome, February 2 - The Council of State, Italy's highest administrative court, on Friday raised fresh questions of Italy naming foreign-born museum chiefs.
Culture Minister Dario Franceschini said "it's really tough to make reforms in Italy "After 16 decisions from the Lazio TAR (regional administrative court) and six from the Council of State, the latter changes its mind and calls into question, again, the decision on foreign directors of museums".
At the end of May Franceschini sponsored a budget amendment overcoming the Lazio regional administrative court (TAR)'s rejection of five out of 20 museum appointments made by international selection.
The amendment stated that in international selection procedures the limits envisaged for civil service appointments do not apply, "limits which preclude EU citizens from accessing posts involving direct or indirect powers safeguarding the national interest".
The amendment would "clarify" museum appointments and "overcome" the TAR ruling, Franceschini said.
The Lazio TAR had struck down five of the 20 appointments for top Italian museums that were recently put out to international selection to attract the best possible candidates.
The TAR ruled against the five because the tender was open to non-Italians, interviews took place behind closed doors, and other technicalities.
The controversial ruling affected four Italians and one Austrian, in Mantua, Modena, Naples, Reggio Calabria and Taranto.
Franceschini said the government would appeal while both ex-premier Matteo Renzi and Justice Minister Andrea Orlando said the TARs must be reformed.
"The world has seen Italian museums change in two years and now the Lazio TAR cancels the appointment of 5 directors," Franceschini said via Twitter.
"I'm speechless".
"We'll immediately appeal to (top administrative court) the Council of State," he said.
"I'm worried about how Italy looks to the rest of the world and about the practical consequences, because as of today some museums don't have a director.
"I find it strange that the sentence talks of foreigners, when in reality they are European directors and this contrasts with the European Court of Justice and the Council of State.
"I am an experienced lawyer and politician. I know that you should not comment on sentences but combat them in the right place". He added that he was astounded that the TAR had described the procedure as confused.
"The international selection was conducted by an impartial committee," he said.
Franceschini added that the museum directors affected by the Lazio TAR's ruling "will be replaced ad interim".
"The sentence has already been published and so the museums are effectively without directors," he added.
"These people left everything and the reform was already bringing about great change, but it has been blocked as of today.
"It is absurd to make distinctions on the candidates' nationality. The director of the National Gallery is Italian, while the British Museum's is German. It's a truly great damage to our image".
Ex-premier and Democratic Party (PD) leader Renzi slammed the TAR ruling and said the government should have reformed the TARs.
"The fact that the Lazio TAR has annulled our decision deserves institutional respect...but confirms, yet again, that we cannot be a country founded on cavils and appeals," he said on Facebook.
"We did not make a mistake in trying to change museums; we made a mistake because we did not try to change the TARs".
Justice Minister Orlando, another top member of the PD, agreed that the TARs should be changed.
"The TARs should be changed, without demonising them but they certainly should be changed by better defining what is the ambit of competence of politics and what is the ambit of competence of an administrative court, which often enters into the merits of choices that should be exclusively the province of politics," said Orlando.
Asked if the TARs too often infringed on the political sphere, Orlando replied "Yes".
TAR sources said that "rather than changing the TARs, laws should be changed".
One Austrian and four Italians were among the five museum chiefs scrubbed by the TAR.
Here are pen-pix of the five.
1) PETER ASSMAN (MANTUA DUCAL PALACE): 63, art historian.
Austrian, studied and worked in Florence, at the Deutsches Kunsthistorisches Institut. From 2002 to 2012 president of the Austrian museum association. Directed Obersterreichischen Landenmuseen di Linz and Angerlehner Museum in Thalheim bei Wels. Teaches at Johannes Kepler Universitat in Linz and University of Vienna. Since 2011 on scientific committee of Buonconsiglio Castle Museum in Trento.
2) MARTINA BAGNOLI (GALLERIA ESTENSE IN MODENA): 53 art historian. Born in Bolzano, graduated from Cambridge in art history and got a phD cum laude from the Johns Hopkins University of Baltimore in 1999. From 2003 at Baltimore's Walters Art Museum. Also worked in other US museums including National Gallery of Art in Washington.
3) EVA DEGLI INNOCENTI (MUSEO ARCHEOLOGICO NAZIONALE IN TARANTO): 41, archaeologist. Born in Pistoia, graduated from Pisa, then got European research doctorate from Siena University. Was a director at the Coriosolis museum of the Plancot Ple'lan community in Brittany. From 1995 to 2008 led digs in Italy and Tunisia.
4) PAOLO GIULIERINI (MUSEO ARCHEOLOGICO NAZIONALE OF NAPLES): 48, archaeologist. Born in Cortona, graduated in archeaology with specialisation in Etruscanology from Florence University.
Director of the Museum of the Etruscan Academy and city of Cortona, where he has worked since 2001, and has had several other museum posts.
5) CARMELO MALACRINO (MUSEO ARCHEOLOGICO NAZIONALE OF REGGIO CALABRIA): 46, archaeologist and architect. Born in Catanzaro, graduated in architecture in Florence and specialised in Archaeology and Ancient Architecture at Athens. From 2010 researcher in history of architecture at the Universita' Mediterranea of Reggio Calabria. In 2005 got doctorate in history of architecture in Venice.