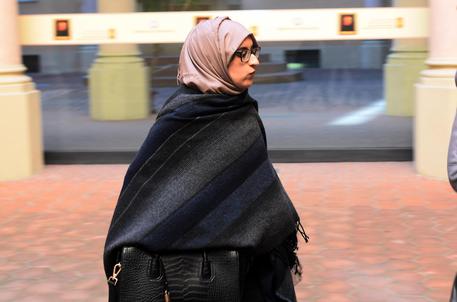 (ANSA) - Bologna, January 18 - A Moroccan-born trainee lawyer ejected from a Bologna courtroom for wearing the Muslim veil but later told she would be allowed back told ANSA Thursday she was "shocked but happy" over the incident. "When the judge said No to me I was shocked, but I'm happy about what I did," said 25-year-old Asmae Belkafir, who was forced to choose between taking off the veil or leaving the regional administrative court (TAR). Belkafir said she was "very much struck" by the many messages of solidarity she had received.
"I was really upset, I had taken part in many hearings and nothing of the kind had ever happened to me," Belkafir told ANSA.
She said there had been a lot of comments on social media about the norm banning covered heads that the TAR judge pinned up outside the courtroom, and "many people are saying the judge was right, but that's not so".
Belkafir, who is a trainee lawyer at a local university, said "norms must be read, known and interpreted.
"This is a legal battle," she said.
Belkafir later emerged from a hearing of a Bologna civil court and said "there as no problem, everything was OK today". The TAR judge's ruling was implicitly challenged Wednesday by Italy's highest administrative court, the Council of State, and the trainee at the Università di Modena e Reggio Emilia was told she could return to court with her hijab on.