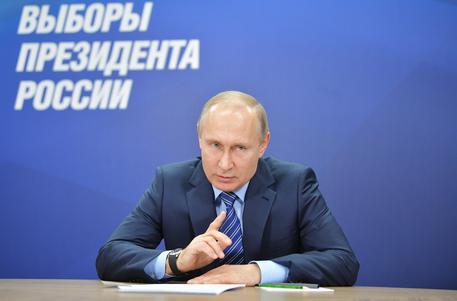 (ANSA) - Moscow, January 11 - Russian President Vladimir Putin on Thursday denied an American Senator's claim Moscow was set to interfere in Italy's March 4 general election. Denying Ben Cardin's claims, Putin said "we have good relations with Italy and for us this relationship with the Italian State is important, it would make no sense to ruin it". He described Cardin's claims as "provocations made on purpose to destroy the ties between our two countries".
Putin stressed that "we have good relations both with political parties and with Italian secret services, with which we have discussed cooperating in digital security." Putin concluded "I, for example, have excellent personal relations with (centre-right leader) Silvio Berlusconi and (former centre-left leader) Romano Prodi, who are opponents in the political arena".
Russian Foreign Ministry Spokesperson Maria Zakharova on Wednesday called Cardin "a liar".
Speaking to ANSA, she said "it's up to the Italians who to elect as their leaders". Cardin's staff said in a report that "with elections coming in 2018, Italy could be a target for the Kremlin's electoral meddling, which will probably try to boost parties contrary to the renewal of EU sanctions on Russia." The report cited the 5-Star Movement (M5S) and the League as "populist, anti-establishment parties" Moscow might want to push its interests by helping.
Both parties, the report said, 2are strong supporters of the Kremlin's foreign policy and have widely used fake news and conspiracy theories in their media campaigns, often orchestrated by Russian state media". It also cited "some observers' suspicions" that the League had obtained funding from Russian secret services.