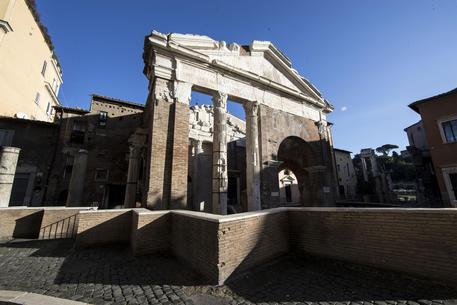 (ANSA) - Rome, December 18 - The ancient Roman Portico of Octavia, a jewel of Rome's Jewish Ghetto, has been reborn after a 14-year restoration that swaddled its famed colonnaded walks in scaffolding.
Rome Mayor Virginia Raggi unveiled the restored structure along with Rome Cultural Heritage Superintendent Claudio Parisi Presicce, Deputy Mayor Luca Bergamo and the president of Rome's Jewish community, Ruth Dureghello.
Campidoglio experts said the world had been particularly "complex" and had been completed thanks to a collaboration between a team of archaeologists, architects and engineers "with the aid of high technologies which allowed, and will allow in future, a constant monitoring of the ruins of the complex which over the centuries has been damaged and repaired on several occasions".
Built by Emperor Augustus in the name of his sister, Octavia Minor, sometime after 27 BC, the Porticus Octaviae's walks enclosed the temples of Jupiter Stator and Juno Regina, as well as a library. The structure was used as a fish market in the Ghetto from the medieval period, and up to the end of 19th century.