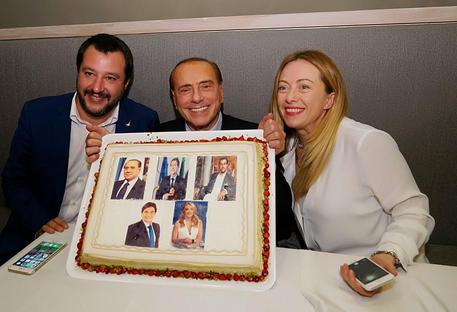 (ANSA) - Catania, November 3 - Forza Italia (FI) leader and ex-premier Silvio Berlusconi said that a pact for a centre-right alliance for next year's general election has been reached after dining with Northern League leader Matteo Salvini and Brothers of Italy (FdI) head Giorgia Meloni in Catania on Thursday. "We were already in agreement," Berlusconi said.
"The pact had already been sealed... the foundations have been laid for the path to win the elections".
The dinner lasted over two hours and ended with a long three-way chat on the veranda of a restaurant in the Sicilian city, where the leaders are campaigning for Governor candidate Nello Musumeci in Sunday's regional election. Meloni, however, played down talk of an agreement already being reached for a national alliance. "It's early to say that we have wrapped up an agreement on the programme of government," Meloni said. "We want to construct a serious, concrete programme and you don't finish that with a dinner at 11 o'clock in the evening.
"We didn't talk about the premiership, about names, but about the objectives to set". Salvini said Friday that Berlusconi's view that a deal had been sealed was "optimistic".
He said the agreement "has already been made in principle, but now we have to put the numbers down on paper"