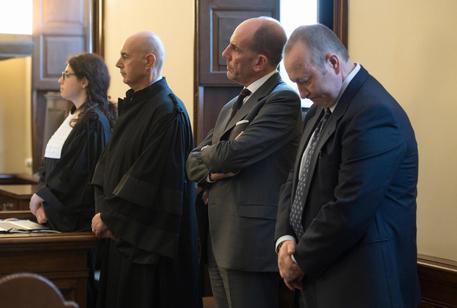 (ANSA) - Rome, October 16 - The former head of Vatican children's hospital Bambini Gesù got a suspended sentence of one year at the weekend for syphoning off funds to pay for the restructuring of former Secretary of State Tarcisio Bertone's luxury penthouse. Prosecutors had asked for a three-year term for Giuseppe Profiti, who was also fined 5,000 euros and slapped a temporary ban on holding public posts. Former treasurer Massimo Spina was acquitted.
During the Vatican trial, a Vatican prosecutor requested a three-year prison term for Profit, former head of the Vatican's Bambino Gesu' children's hospital foundation, for embezzling funds to restore Bertone's Rome apartment.
The prosecutor, Roberto Zanotti, requested the acquittal for lack of evidence of former Bambino Gesu' foundation treasurer Spina.
The prosecutor said a picture of "desolation" had emerged, "marked by opacity, silences, and very bad management of the public good".
Bambino Gesu' President Mariella Enoc told the court Bertone was "not aware nor agreed to" the revamping of his flat.
Bertone did not have to testify at the trial of Profiti and Spina.
Profiti and Spina were on trial for allegedly using 422,000 euros to pay for improvements to the central Roman flat.
"The Vatican is determined to go all the way" in the case, Secretary of State Cardinal Pietro Parolin said during the hearings.
The pair were charged with using the cash "for completely extra-institutional purposes" in restructuring Bertone's allegedly luxury living quarters.
Unveiling the misappropriation probe against Profiti and Spina last year, the Vatican said it was in connection with expensive renovations to the penthouse apartment inhabited by Bertone.
Vatican Spokesman Greg Burke said the probe began after allegations that the work was paid for by the foundation linked to the Bambino Gesu' pediatric hospital in Rome, confirming an earlier report by L'Espresso news magazine.
The hospital operates in the Italian national health system but is owned and managed by the Holy See.
Cardinal Bertone was not under investigation, Burke stressed.
L'Espresso said in its report that the Vatican had launched a probe into the funding scandal after journalist Emiliano Fittipaldi documented alleged lavish spending by clergymen in his controversial 2015 expose' book, Avarice.
Fittipaldi was acquitted in a trial in the Vatican along with another journalist in the so-called Vatileaks 2 case last year involving the alleged leaking of confidential Vatican documents.
A Vatican former PR expert, Francesca Chaouqui, got a suspended sentence while a Vatican official said to be the chief leaker, Mons. Lucio Vallejo Balda, got 18 months.
"Pope Francis' judges have already found evidence documenting how the renovations to the apartment were paid for by the Bambin(o) Gesu' pediatric hospital foundation," Fittipaldi wrote in the article.
L'Espresso claimed the renovations cost a total of just over 422,000 euros and were billed not to the contractor - the now-bankrupt Castelli Re - but to a London-based holding company controlled by Gianantonio Bandera, the owner of Castelli Re and Bertone's personal friend.
"The money destined for sick children was in actuality used for the renovations and then sent on to London," Fittipaldi wrote.
"In addition to the seven invoices paid to the builder out of the Foundation's accounts at the Institute for Religious Works (IOR) and the Administration of the Patrimony of the Holy See (APSA), Pope Francis' magistrates also have signed letters nailing Benedict XVI's former secretary of state to his responsibilities," L'Espresso continued.
The magazine said it was in possession of correspondence between Profiti and Bertone suggesting the manager offered to pay for the renovations through the foundation in exchange for hosting "institutional meetings" in the penthouse apartment, and that the cardinal accepted the offer the following day.
"Bertone's name is not cited in the magistrates' document but the Holy See will find it hard to overlook his direct involvement in the scandal," L'Espresso said.
The cardinal has denied any wrongdoing.
"(The cardinal) reiterates he never indicated or authorized the Bambin Gesu' Foundation to make any payment in relation to the apartment he occupies," his lawyer Michele Gentiloni Silverj said in a statement.
The note echoed denials made at the time of the revelations in autumn 2015.
"I used my savings," Bertone wrote in Genoa-based Catholic weekly Il Cittadino last November.
"I have the paperwork to prove I paid roughly 300,000 euros to the Vatican governorate from my own account.
"I later discovered that the Bambin Gesu' Foundation had made a contribution for the same purpose," he continued.
"I rule out having ever given indication or authorised the foundation to make any payment," the cardinal said.
Cardinal Bertone also denied living in luxury.
"The apartment measures 296 square metres and I don't live there on my own. I live with a community of nuns who help me," the prelate told Corriere della Sera newspaper at the time.