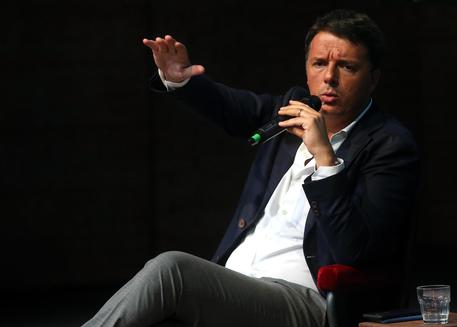 (ANSA) - Rome, September 15 - Democratic Party (PD) leader and ex-premier Matteo Renzi said Friday that alleged attempts to tarnish his reputation via a probe into civil-service procurement agency CONSIP will backfire on the people behind them. "Those who wanted to use the CONSIP case to throw mud at me will see that mud bounce back at them," Renzi said at a Milan event organized daily newspaper Il Foglio. "Time is a gentleman and it will be with the CONSIP case too". Renzi expressed "total faith" in the Rome prosecutors and judge working on the case. "We demand that the truth come out," he added.
He was speaking after newspapers reported that senior members of the Carabinieri police allegedly told a prosecutor that they wanted to "get to" Renzi when he was premier. In July Modena prosecutor Lucia Musti reportedly told the judiciary's self-governing body, the CSM, about comments attributed to Carabinieri Gianpaolo Scafarto and Sergio De Caprio in July 2016, when Renzi was premier. The CSM has sent evidence in relation to the case on to Rome prosecutors.
The Carabinieri reportedly said to Musti that "if you want, you have a bomb in your hand. You can let off a bomb. It'll be chaos. We'll get to Renzi". Scafarto is under investigation for allegedly wrongly attributing to arrested businessman Alfredo Romeo, and not to centre-right politician Italo Bocchino, a phrase allegedly concerning a meeting with Renzi's father Tiziano in evidence for the CONSIP probe. Tiziano Renzi is under investigation in the CONSIP case as is Sport Minister Luca Lotti, who is considered close to the ex-premier. De Caprio is the so-called 'Capitano Ultimo' (last captain) who arrested Cosa Nostra boss of bosses Totò Riina.
"I have never carried out investigations for political ends," De Caprio told ANSA, saying he was the victim of a "media lynching".
"I never spoke about Matteo Renzi, neither with Musti, nor anyone else".