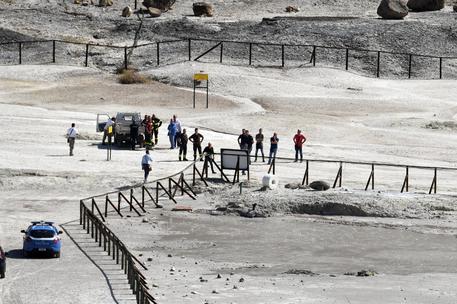 (ANSA) - Naples, September 12 - A couple and an 11-year-old boy have died at the Solfatara volcanic crater at Pozzuoli, near Naples, police said on Tuesday. Another child, aged seven, survived. The victims fell into a pit of boiling-hot mud, according to an initial reconstruction by the Campania Civil Protection Department, sources said. The three-metre-deep pit opened up as the mother and father followed their 11-year-old son, who is thought to have gone into an area forbidden to visitors. Firefighters recovered the bodies, the sources said. The victims were named as Tiziana Zaramella, a 42-year-old originally from the province of Turin, Massimiliano Carrer, 45, and the couple's son, Lorenzo.
Solfatara is part of the Campi Flegrei volcanic area. It is dormant but still emits jets of steam with sulfurous fumes.
"I'm distraught by what happened at the Solfatara volcano," said Pozzuoli Mayor Vincenzo Figliolia.
"I feel deep pain for this inhuman tragedy involving three tourists.
"I express the full support of the community of Pozzuoli to the families of the victims". The family lived in Meolo, a town in the province of Venice, and the mother worked at Venice Marco Polo Airport.
Other visitors were told to exit and the site was closed. The surviving child was put temporarily into the care of local social workers flanked by a psychologist, with the grandparents set to arrive later on Tuesday. The Solfatara volcanic site is privately owned and managed by the Vulcano Solfatara srl company.
It has an 2.3 kilometre perimeter.
It highest point, Monte Olibano, is 199 metres above sea level and its crater is 92 metres above sea level.
The site is open all year and also hosts evening visits.