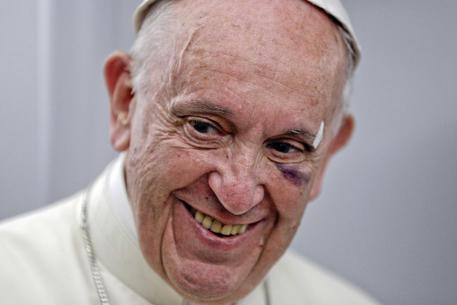 (ANSA) - Aboard the papal plane, September 11 - Pope Francis said Monday "why do they tarry in becoming aware of the effects of climate change? A phrase from the Old Testament comes to me, from the Psalm: 'Man is stupid'." Speaking at a press conference on his return from a trip to Colombia, Francis said: "he is stubborn".
"Pride...and Mammon too. So many things, so many decisions, so many contradictions depend on money. The pontiff said that those who deny climate change "should go to the scientists and ask them.
"They speak very clearly, the scientists are precise.
"You can see the effects of climate change and scientists clearly tells us the path to pursue.
"And we all have a responsibility, all of us".
In other remarks, Francis said he approved of the Italian government's line on migrants and Libya. "A government must manage this problem with the primary virtue of a governor, that is prudence. What does that mean.
First: how many places do I have? Second: not only receive, but integrate". On migrant conditions in Libya, he said "I have the impression that the Italian government is doing its all, for humanitarian work, to resolve problems it cannot take on (personally)".
Francis said he was "grateful" to both Italy and Greece for "opening their hearts" on the migrant issue, and said he had seen "very beautiful examples of integration" in Italy.
Asked if an early August meeting with Premier Paolo Gentiloni might explain the Vatican's less unfavourable stance towards the government's migrant-traffic crackdown, Francis said the encounter was "a personal one and not on that (issue)".
In other remarks, the pontiff said: "those who are corrupt can't ask for forgiveness"; US President Donald Trump should not split up migrant families; that he had been moved by the "joy, tenderness and nobility" of the Colombian people; and that he "did not understand" the North Korea crisis.
He also said that the Holy See had spoken "loud and clear" about the Venezuela crisis, saying that "what is most painful is the humanitarian problem".
As for the Popemobile accident that left him with a bruise next to his eye and a plaster on his forehead, the pope said "I leaned out towards the kids, didn't see the glass, and bang!"