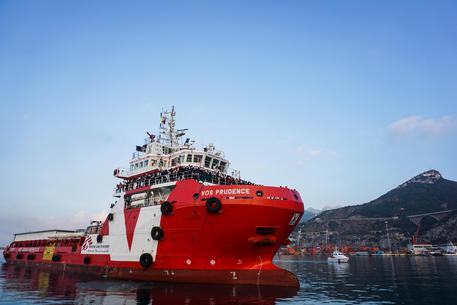 (ANSA) - Rome, August 7 - Doctors Without Borders (MSF) has said it is being involved less in migrant rescue operations after refusing to sign an Italian-drafted code of conduct for NGOs operating in the Mediterranean.
"We are not the first to be called for rescue operations as occurred in the past", said Michele Trainiti, the head of the NGO's search-and-rescue project. "We know we will be working less but we are always at the disposal of the Coast Guard. We are here and we are ready to cooperate.
"Our position has not changed we are working as usual respecting the law. We adapt to the Coast Guard, we do what we are asked to do. This doesn't mean avoiding the code, we don't want to cause controversy. As usual, we are working in the respect of international, maritime and Italian laws".
The official added that the Coast Guard "gives indications on rescue operations and coordinates operations. We have always cooperated and we will continue to do it. We are at sea to save human lives and we will continue until we are allowed. All we want is to work in peace".
Trainiti also spoke about an operation on Saturday night in which 127 migrants aboard its vessel Vos Prudence were transferred aboard two Coast Guard cutters, rather than being taken to an Italian port: "The operation took place in a calm and regular manner. Such a procedure is not unusual. Perhaps, before the code we could have sailed closer to Lampedusa. But such transfers at sea are not unusual. The Vos Prudence actually has a deep draft so we could not have reached the port".
He also expressed the hope that "this political moment can be solved to work in peace. The pressure on the work of NGOs - concluded Trainiti - could limit their ability to rescue people, to save human lives".