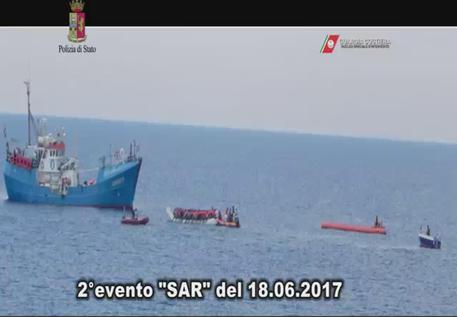 (ANSA) - Brussels, August 3 - The European Commission said Thursday that it has faith in the Italian authorities regarding the case of the Iuventa, a ship operated by German NGO Jugend Rettet that has been confiscated in relation to a probe into alleged aiding of illegal immigration. "We know about the incident but we don't have details about whether it is the result of the code of conduct for the NGOs or something else," EC spokesperson Mina Andreeva said. "We have confidence in the Italian authorities that are handling the case". The NGO's Dutch-flagged Iuventa ship was confiscated on Wednesday at the Italian island of Lampedusa.
No members of the NGO have been charged so far and prosecutors in the Sicilian city of Trapani said that they believed Jugend Rettet's activists were working for humanitarian reasons and did not have direct relations with the traffickers.
However, photos that seem to show an incident when migrants were not rescued at sea but were effectively handed over by traffickers sparked almost unanimous condemnation on social media, with many users blasting it as "shameful". Jugend Rettet put out a statement on Twitter Thursday saying that it was sorry it was unable to conduct search and rescue at the moment, adding that the "rescue of human life is and will be top priority". Jugend Rettet was one of several NGOs conducting rescues in the Mediterranean that this week refused to sign a new code of conduct at the interior ministry. The Commission has said NGOs that do not sign the code will not be guaranteed access to Italian ports.