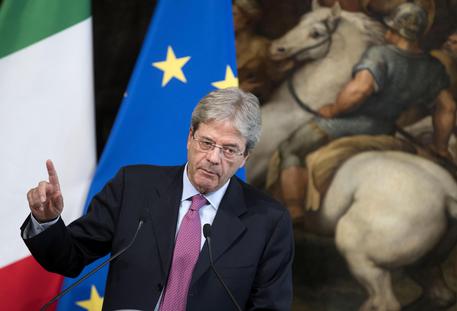 (ANSA) - Rome, July 28 - Premier Paolo Gentiloni's government on Friday approved a resolution for an Italian mission of support to the Libyan coast guard. Gentiloni said the Italian mission should be considered "a step forward in Italy's contribution to the Libyan authorities' capacity to take the initiative against traffickers and reinforce their capacity to control their borders and national territory". He added after the cabinet meeting that: "it is a piece of the path of stabilization of Libya and Italy feels it a duty to participate".
The cabinet "approved what the (Libyan) government requested, no more, no less," he said.
Gentiloni announced Wednesday that Italy was considering a request from Libya for the help in combatting human traffickers after meeting Libyan Premier Fayez al-Sarraj in Rome. Most of the over 93,000 migrants to have landed in Italy so far this year started their journey across the Mediterranean from Libya, which has been affected by chaos since a Paris-led campaign contributed to the fall of Muammar Gaddafi in 2011. Gentiloni stressed Friday that the use of Italian vessels to support Libya would not entail "an enormous deployment of big feels and air squadrons".
"It can give a significant initiative to support Libya sovereignty, it is not an initiative against Libyan sovereignty," he said. Gentiloni said that he hopes support in parliament for the mission goes beyond the ruling coalition. "I hope that parliament can give approval with the broadest possible consensus," he said.
There is speculation that some left-wingers within the ruling coalition may rebel over the mission.