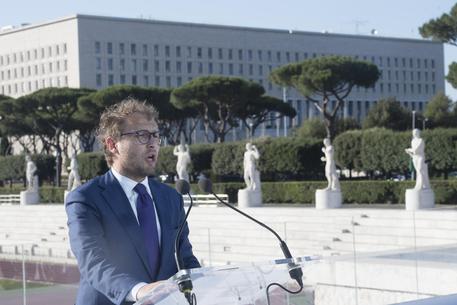 (ANSA) - Rome, July 14 - Sports Minister Luca Lotti was questioned for about an hour in the CONSIP civil-service procurement agency graft case Friday.
In the case, the close aide to former premier Matteo Renzi is is suspected of tipping of CONSIP chief Luigi Marroni about the probe.
Marroni has said it was Lotti who tipped him off, allowing him to clear his office of bugs, but Lotti denies this.
Lotti's lawyers said after the hearing that the sports minister had "reiterated he had absolutely nothing to do with the matter".
Lotti said before questioning he was "sure the truth will come out". "The serenity I have within because I know the truth...won't stop me continuing in my work and trying to give a hand to sport in Italy and sports associations," he said. "I repeat, I think that in the end the truth will come out". Lotti survived no-confidence motions tabled because of the probe in March.
The probe also involves the father of ruling centre-left Democratic Party (PD) leader Renzi, Tiziano.
Tiziano Renzi is suspected of influence peddling in the probe.