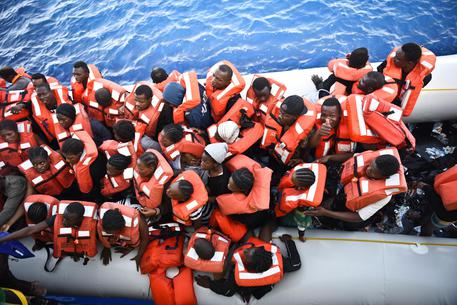 (ANSA) - Rome, June 28 - Italy took a formal step to protest the migrant emergency with Brussels Wednesday and said that foreign ships may be stopped from docking in Italian ports unless the situation improves.
With over 12,000 migrants landing in the last 48 hours, Rome said the situation, with its impact on social and political life, was "unsustainable" and "at the limit".
Italy is taking a formal step with the European Commission in relation to the large numbers of asylum seekers landing on its shores, ANSA sources said. Over 10,000 asylum seekers arrived in Italy from Saturday to Tuesday and some 12,000 have arrived in the last 48 hours. The government gave its ambassador to the EU, Maurizio Massari, a mandate to formally raise the issue with European Migration and Home Affairs Commissioner Dimitris Avramopoulos, the sources said.
Massari went on to tell Avramopoulos that the situation regarding asylum seekers landing in Italy was at the limit, diplomatic sources said. Massari said the situation was having an impact on the country's social and political life and, as a result, it would be difficult to allow new arrivals, the sources said. Rome's message to the Commission is that Italy is facing a serious situation and Europe cannot look the other way. It is unsustainable, Italian diplomatic sources said, that all rescue ships should land in Italy. If the situation does not change, they said, Italy may be forced to deny permission to dock to non-Italian-flagged ships or ones that are not part of European missions.
The Italian government is in fact mulling whether to deny docking privileges in Italian ports to ships rescuing migrants off Libya that are flying non-Italian flags, government sources said. They reiterated it was now "unsustainable" that all the vessels operating in the Mediterranean should bring rescued asylum seekers to Italy.
Italy, the sources said, will continue to save human lives at sea as it has always done over recent years, but it is no longer sustainable that the whole burden of migrant reception should fall on Italy. Rescues and reception cannot be separated and therefore the contribution of the EU must not be limited to sea rescues, the sources said. A possible block on Italian ports would concern ships operated by non-governmental organisations operating in the central Mediterranean, sources indicated.
But it would not for the moment affect naval units inserted in the mission of Frontex, the EU border control agency, and in EUNAVFOR MED, the operation that is tasked with combatting human traffickers in the Sicilian Channel and in which 25 European nations are taking part, the sources said.
Ex-premier and ruling centre-left Democratic Party (PD) leader Matteo Renzi backs the new hard line on migrants and the EU taken by Premier Paolo Gentiloni and Interior Minister Marco Minniti, PD sources said. The sources welcomed the formal diplomatic step on migrants taken by the government with the European Commission, noting that Renzi on Tuesday himself called the situation "unsustainable". They also pointed out that the PD leader's positions on Italy getting more help in coping with the migrant emergency were "well-known".