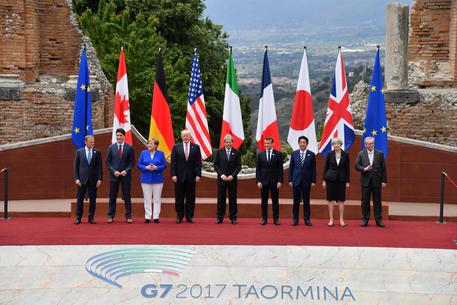 (ANSA) - Taormina, May 26 - The 2017 Group of Seven (G7) summit opened in the Sicilian town of Taormina on Friday with the traditional 'family photo' of leaders at the Sicilian resort's ancient Greek theatre. Italian Premier Paolo Gentiloni, playing host at his first G7 summit as head of government, has said that the talks will not be "simple", amid differences between the European allies and United States President Donald Trump's administration on several issues, in particular on trade and climate change.
The fight against terrorism, migration and ties with Africa are also on the agenda. It is also the first G7 summit for Trump, British Prime Minister Theresa May and French President Emmanuel Macron.
"We call for results from the G7" Gentiloni said in a video message before the start of the summit. "We know that the talks will not be simple but the spirit of Taormina can help us (move) in the right direction".
He added that the G7 summit will produce "an important statement on terrorism and security". "I think the extraordinary history and beauty that surrounds us will give a very important contribution to the G7 leaders and help the international community give responses to citizens," he said. European Council President Donald Tusk told a press conference Friday that the summit in Taormina was set to be "the most difficult of the G7s". Tusk highlighted differences on climate change, trade and security and vowed that "the EU will do everything for an agreement" and work for unity.
European Commission President Jean-Claude Juncker, meanwhile, called on Trump's administration to stick by the Paris Agreement on climate change. "For us, the Paris Agreement should be applied in its entirety," Juncker told reporters.