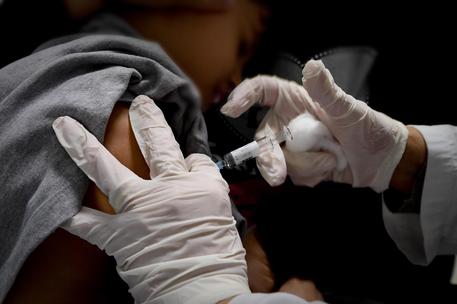 (ANSA) - Rome, May 19 - The cabinet on Friday approved a decree reintroducing compulsory vaccinations for school admissions. The decree had been held up by a row between Health Minister Beatrice Lorenzin and Education Minister Valeria Fedeli over the age limit for the obligation, with Lorenzin wanting it raised to 10 and Fedeli insisting it should be left at six.
In the end, Fedeli won out.
Premier Paolo Gentiloni said "without vaccinations there can be no entry into schools from ages 0-6".
He said the aim of the reform was to "avert a real emergency".
Sanctions up to "30 times the current ones" will be envisaged for children who are not vaccinated, the premier said. Among the compulsory vaccinations, he said, would be those for measles and meningitis, whose cases have risen in Italy recently.
Lorenzin said there would be "12 compulsory vaccinations that will be required for school admission".
These were a further eight in addition to the four already decreed compulsory: anti-polio, anti-diphteria, anti-hepatitis B and anti-whooping cough.
The new entries are anti-meningococcus B and C, anti-measles, anti-scarlet fever, anti-parotitis, anti-chicken pox and the vaccine against aemophilus influenzae, which causes a severe form of influenza. Gentiloni said the new system would come into force "gradually", saying that the government appreciated the need to "progressively" involve parents.
He also said the new standards would serve as benchmarks for Italy's regions, which govern health management and spending in Italy.
The government has vowed to end a climate of vaccine skepticism in Italy.
Some of the skepticism has been raised by past statements from the anti-establishment 5-Star Movement (M5S), which the M5S and its leader, comedian Beppe Grillo, have since gone on to disown.