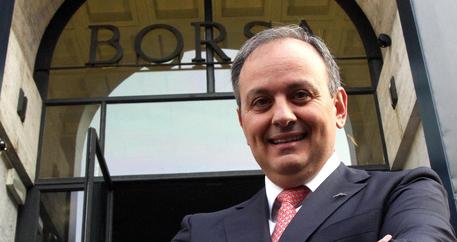 (ANSA) - Milan, April 10 - Italian satellite propulsion system maker Avio surged 11% on the Milan bourse after its merger with Space 3.
"From today space is closer" said Avio CEO Giuseppe Ranzo.
Leonardo Finmeccanica, an Avio shareholder since 2003, is part of the operation and its stake has risen to 28%. Over 40 Avio managers have also taken up a 4% share. "It is the first time a producer of space launchers has been quoted on the bourse. We are a technological public company, with more than 100 years of history, the first in the world in the production of space systems that put in orbit satellites that make life on earth easier and safer," Ranzo said after the traditional bell-ringing ceremony marking the start of trading.
Also in attendance were astronaut Samantha Cristoforetti and publisher Urbano Cairo, Space 2 shareholder. "It is a personal investment, a private initiative of mine. I have met the management many times and they have made a tremendous impression on me. Avio is a company that has a very great potential," said Cairo, top shareholder in the RCS media group.
Avio is present in Iatly, France and French Guyana with five sites that employ some 760 people.
Among its main clients is the European Space Agency (ESA), while last September the Colleferro-based company launched four satellites for Google Maps. "The listing will enable us to accelerate our investments for growth and development of new products. Since 2015 we have been working on the new Vega C launcher and on the engines for the first stage of Ariane 6 which will fly in 2019 and 2020. Since the start of the year we have started the development of Vega E which will fly in 2025," Ranzo went on.
"Avio is being listed in the Star segment with a very high float (above 65%), positioning itself among the excellent firms appreciated by investors the world over. Through the listing, the company will be able to continue its process of development based on highly technological content and projected onto the global market," said the CEO of Borza Italiana, Raffaele Jerusalmi. Avio's listing marks the 10th operation of the year and the third debut on the main market of the Italian bourse.