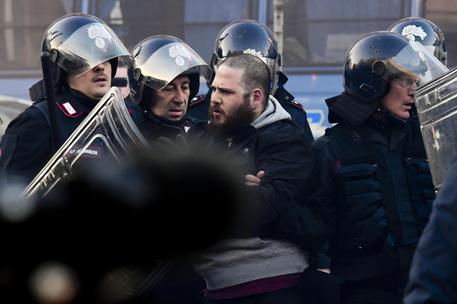 (ANSA) - Naples, March 13 - Political tension remained high on Monday over violent street protests in Naples against a rally by the anti-immigrant and anti-euro Northern League leader Matteo Salvini on Saturday that resulted in three arrests and 34 injured including 28 police.
Naples Mayor Luigi de Magistris denied accusations that he had supported the perpetrators of the violence after apparently taking sides with demonstrators against the formerly secessionist leader, who has turned his party into a nationwide one but still regularly gets barracked in southern Italy.
"I am not on the side of people who are violent, ever," De Magistris said after being accused by former premier Matteo Renzi of fueling tension ahead of the rally.
"These attacks are totally unjustified," de Magistris said.
The charges came after de Magistris seemed to express support for an anti-racism network and radical and anticapitalist squats that had occupied the convention hall where Salvini was due to speak.
For his part, Salvini said he would return to Naples - where his rally eventually went ahead on Saturday - as well as holding rallies in other parts of the South. The Northern League had traditionally disparaged Italy's poorer south, the Mezzogiorno, as draining money from the affluent north but, because of a recent switch from a regionalist to a nationalist populist stance, Salvini has been aiming to court voters across the Mezzogiorno too.
Salvini went on to describe the perpetrators of the violence as "a bunch of criminals " and called on de Magistris to pay for the damage "that he sought".
Two of the three people arrested during the protests are to be released from jail, a judge ruled Monday. The judge upheld a request from prosecutors that the pair, Luigi Tarantino and Carmine Esposito, be obliged to sign in at a police station three times a week.
Their trial is set to start on May 17.