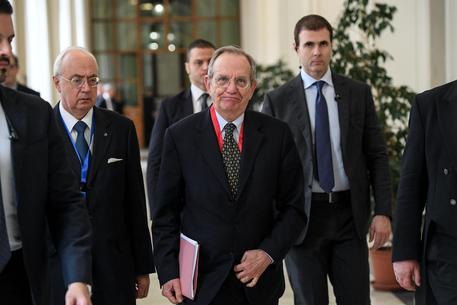 (ANSA) - Paris, February 23 - Italian Economy Minister Pier Carlo Padoan said Thursday that Brexit may not end up being an "isolated case," arguing that the European Union risked "other departures" without a "drastic" change of strategy. Padoan was speaking in Paris, where is taking part in the Capital Markets Summit 2017. Rome has been calling for the EU to be less rigid in the application of its budget rules, adding that it is unfair that Brussels had not been equally strict with member States who have failed to do their bit to help Italy cope with the Mediterranean asylum-seeker crisis.
Padoan added that the European Union must give answers to people's problems if the rise of populist political forces is to be headed off. "Citizens ask 'will I find a job? Will my children be better off? Will life be safe?' They deserve European responses," he said via Twitter.
The European Commission said Wednesday that Italy risked infringement procedures if it did not deliver an adjustment to reduce its structural deficit by 0.2% of GDP by the end of April. In a report on Italy's debt, the Commission said the country suffered excessive macroeconomic imbalances and lamented a slow down in its pace of reform.
Padoan said Thursday that Premier Paolo Gentiloni's executive was working hard on delivering structural economic reforms. "The government is working to accelerate on reform, both by introducing new measures and implementing those already adopted," Padoan said